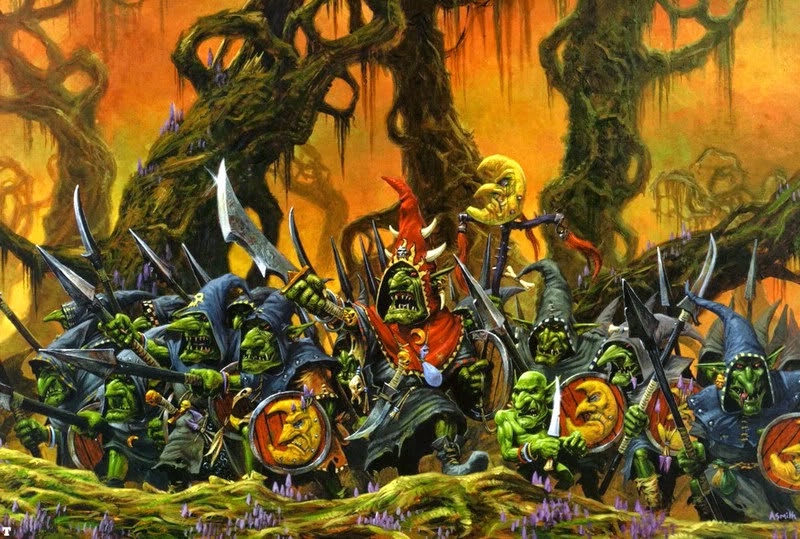 Who doesn't love the underdog? I know I find it hard not to be on their side, and in warhammer fantasy one of the biggest underdogs are the goblins. Now I do have a soft stop for the forest goblins, as they are rather under developed these days compared to what they once where, but for now I'm focusing on the night goblins. I know a lot of people play around with the night goblins, and that has put me off in the past a little, but hell, the little buggers have squigs so I'm going to play with them for a bit.


My new found love of the night goblins might have something to do with a few recent purchases and a gift I got not so long ago. These are the forgeworld night goblin command and the squig gobba. Now in my report from last friday, I used a 1500 point list of goblins, using a regular goblin warboss which didn't feel right. So I wanted to make a proper night goblin list, wanting to use these models I came up with this 2000 points list.

This list only has two units which can do real damage, the common trolls and the squigs. This means I am going to have to be careful with these and make sure they hit the enemy where they hurt. The two blocks of infantry will hold the enemy in true night goblin fashion and the bow unit will give me the option of having them to shoot or to act as a third block of infantry.

I am rather exited to try out the forgeworld squig gobba, its got a rather unique set of rules. The rules don't make the model an an auto-include, but the beautiful model really makes it one. I just don't know how you could leave it on the shelf if you have one. If only the colossal squig could properly be used in regular games with out your opponents permission I would use that a lot more often.

Characters are a bit of an issue with this list as I have gone a little bit overboard with them. Having only 3 units they can join it means some units will have two characters joining them. This might give me a slight edge in combat, but it can also mean my magic phase could get wiped out with a single bad animosity role. However one big difference between this lists characters and my 1500 point list is that I am lead by a Night Goblin this time. It will give me a massive issue with my leadership, but such is life when your a night goblin.

However I have added 2 none night goblin units, the doom diver and rock lobber. While these are crewed by common goblins, please forgive me for wanting to add in a little more fire power to this list which isn't going to kill much in hand to hand combat.

Anyway what do you guys think? Its probably quite a standard list for night goblins, but still.
Posted by Malduran
Labels: Army List