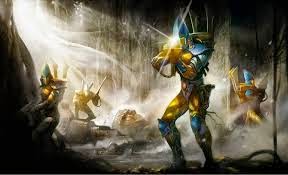 With the main review out the way I though I would have a more in-depth look at the formations in the book and my feelings on them and any potential combos that could make then rather valuable on the battle field. This will be a two part look.

This formation consists of a farseer, 3 units of guardian defenders, a vyper squadron, a war walker squadron and a vauls wrath support battery. You can also take an optional warlock conclave.

And your benefits for taking this formation? You get heavy weapons for free in the defender units, and when one of the none defender units targets an enemy within 12 of a defender unit then get preferred enemy.

Made up of some of the rather more flimsy units from the codex this formation isn't going to be known for it's staying power. To get the most out of this formation your guardians have to be in charging range of the enemy. This is kind of where you want to be with your guardians for them to shoot, but if you don't wipe out your target you probably wont be there next turn. This means that you will have to make the most of your other units, which can pump out a lot of fire power if equipped properly. War walkers with scatter lasers can shred infantry, as can vypers with 2 shuriken cannons. Or if you equip them with bright lances you have a shot of taking out vehicles.

Now as you get a heavy weapon for free on the guardians it then becomes a decision on what to buy. My first though was you might as well buy the most expensive one, the missile launcher, as its free. This gives your guardians a skyfire option as well as plasma and krack shots. Its a good al rounder. BUT it won't really help you take out your target when you are within the 12 inch zone, which makes me think maybe you should go with either the scatter laser for more shots, or starcannon for taking out those 2+ save units. I would say a bright lance but if you are relying on the guardians to take out tanks you are doing it wrong.

You could play this formation rather defensively to hold objectives and use the war walkers and vypers to counter any threats that approach them. This will probably work provided that the enemy come at you piece meal and not have several units being thrown at you. Personally I would use this formation on a flank and use it for both an offensive punch of two guardian units, and holding 1 back for defence. The war walkers should have the range to help both sides while the vypers are fast enough to get where they need to be. This way your vauls wrath support isn't alone at the back, it has its own guardian squad with it. But that's just my opinion.

This formation is just the same as the one above, except that it utilises storm guardians instead of guardian defenders. And instead of gaining heavy weapons for free they get 2 special weapons and 2 power sword, so they get more items for fee.

Storm guardians want to be in combat so getting close to the enemy isn't a big deal, and they aren't going to be hiding at the back. They aren't the most survivable units in combat but at least they get get a good number of attacks, and with 2 power swords each, they should do some damage. If you have warlocks with them (which you should) they could be quite a nice little attacking force.

This formations preferred enemy special rule will probably be used a lot more with this formation and could be quite a good force multiplier. However I don't have much experience with the storm guardians so this could all be total rubbish.

This formation consists of 3 units of windriders, a farseer on jetbike, warlock conclave on jetbikes and vyper squadron.

Once per game this formation can have shred for all of its shuriken weapons, so this formation is definitely an offensive one. Now your only real decision is do you take scatter lasers or shruriken cannons on your jetbikes? If you go for scatter lasers you no longer gain a benefit form the special rules but you have the advantage of range and never needing to get in range of the enemy guns. This does have its own charm, but if you need to go up and take objectives I would say go for shuriken as while it has less shots, it can blade storm (rend) and in an important turn, shred could really come in handy. Unlike in the defender host, the farseer could be very important, if you can get fortune on the bikes it will make them very hard to shift, or if you go divination it could give them a 4+ invulnerable so they never need to jink.

Now I wouldn't say upgrade every model to have either a shuriken cannon or scatter laser, that would be too many points for what this formation does. But it does need some, as otherwise those shuriken catapults just will not cut it when you need to kill something. Maybe sticking to the old fashioned 1 in 3 to upgrade, and then maybe if you have some points left over later upgrade some more.

However you can just take 3 minimum units and give all the bikes scatter lasers and never get caught, but you will likely only do that if you are taking a warhost (more on that later).

this formation is rather a small one, its a single unit of at least 5 warlocks and 2 farseers. They can take jetbikes if you wish, which will give them great survivability and manoeuvrability however the points jumps from 375 to 480. which upon writing this, really isn't that much of a difference and makes them hugely more survivable.

The benefits from this formation is that the farseers may never leave the unit but all the models can harness the warp on a 3+ instead of a 4+. This makes the unit very effective as casting powers which will help you force out massively, as well as making the unit stupidly powerful. As you have 5 warlocks you get 2 powers, having a good chance of getting some useful powers, such as protect, which if you are on bikes, will give them a 2+ cover save. You will have conceal so if you jink you get a 2+ cover save and then of course you still have the 4+ invulnerable. With two farseers you could either go both farseers with the eldar powers for a shot at fortune (re-roll all of those saves) and having 2 guides to throw around. Or you could have one with runes of fate and one with telepathy to mess with your opponent. As you are needing 3+ to cast as well it will make it so much harder for your opponent to stop, and this formation gives you 11 dice in the psychic phase as well, so your opponent will have to pick which powers to stop very carefully.

This unit will not be moved unless it gets alpha striked before they start casting powers. You can happily have them in reserve if they are on bikes as you can move them on, cast powers then boost to where they need to be for next turn. Another great thing about this unit is with so many witch blades they aren't terrible in combat, they aren't going to murder a unit of terminators in a single phase but they can hold their own for a long time as long as you have the powers on them.

In my opinion the guardians formations aren't anything great, and if you take them on their own, good for you, I can see no problem with that as they are fine. The seer council you will probably see taken as a supplement to a force unlike the other formations I have mentioned here. Now in part 2 I will go over the real reason you would take any of the guardian formations as well as the rest in the codex. But for now that's me done. Next week, part 2.
Posted by Malduran
Labels: Article, Eldar