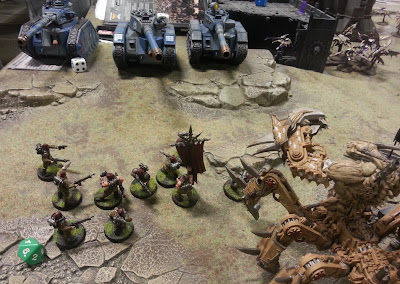 My third game of the first day and my renegades face an imposing force, a Steel Host Formation. As the event is based around armoured forces this army fits the bill perfectly, and I did think a few people might take an army like this. It doesn't mean I am prepared to face it though, but on the up side we are fighting on the Vraks table, so its fluffy, renegades vs guard. The mission for this game is cloak and shadows with hammer and anvil deployment. For my previous games you can click to see Game 1 and Game 2.

For this game its cloak and shadows, so 3 objectives which are hidden from each other, with hammer and anvil deployment. Rolling for deployment I win the roll and select to deploy first. In the left of my deployment zone I have a rather large ruin quite close to the front of my deployment zone so I place the medusa inside of it to get in range. On the far right I place the plaguebearers to move up and wreck any tanks they come across. In the centre I place a soul grinder supported by a unit of infantry. On the left the other large blob of infantry deploy. At the very back of the left the battle tanks deploy so they will likely be able to target something, but I don't expect them to do much this game. My commander goes on top of a ruin ready to get his lascannon to destroy some tanks. Both chimera deploy on the left ready to go flat out up the flank and get their melta guns into range. I place a soul grinder and unit of nurglings in deep strike reserve.

The tanks don't have much room to deploy so he places his vanquishers opposite my battle tanks at the very back of his deployment. He also places the annihilators with them to ensure he blows my tanks apart. With no real targets the hydra deploys in the centre with no real line of sight. On the right at the back, the commander and exterminators are deployed. 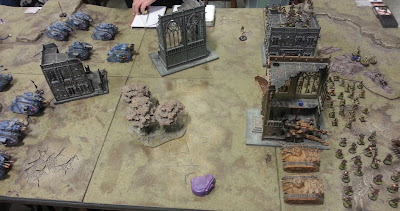 With his army at the back of his deployment zone I have no choice other than to move straight at him as fast as possible. All of my infantry move up while the two chimera transports go 12 inches straight up the left flank. In the centre the soul grinder and zombies shuffle up.

Shooting phase and the infantry run for the objectives. Battle cannon fire from the battle tanks targets the vanquishers and annihilators and manages to take off a couple of hull points from each unit. Lascannon fire from the commander hits the punisher tank and causes a shaken result. Both chimeras go flat out. 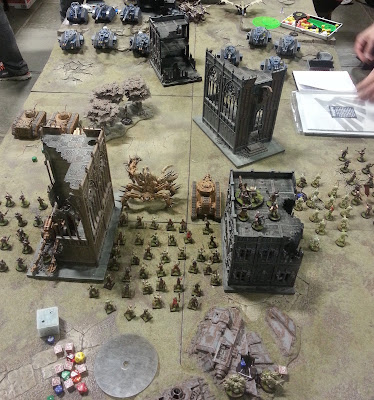 With out wanting to move closer to my ranks the tanks shuffle around a little to get better lines of sight, except for the command unit which moves closer to get the punisher cannon in range.

Despite being shaken, the command tank fires everything it has at the plaguebearers and brings a few down, the plasma shots from the executioner kill off a few more, for a total of 5. However one of the plasma cannons overheats and takes a hull point off the tank. Exterminators fire everything at the infantry on the right and manage to kill off all 20 men in a single shooting phase with ease, each tank does put out 13 shots, and with preferred enemy thanks to the commander, that's a lot of pain. Training their lascannons on one of the chimeras the annihilators explode the chimera and the troops inside run for it.

End of the turn and all of the tanks pass their it will not die rolls. Damn. 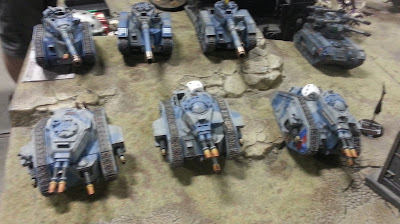 There is still very little I can do as he out ranges me greatly but in from reserve a soul grinder comes in and deep strikes in on the right hand side next to the command unit. The infantry move up again while the last chimera goes up. The running infantry rally and move towards the objective in the centre. 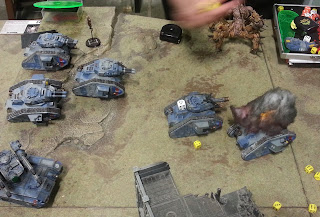 Again the battle tanks shoot at the vanquishers and manage to get a couple of glancing hits. The demolisher is in range this time and manages to shoot at the command unit and takes a hull point off the extra tank I the unit. Under orders from the commander, the lascannon in his unit follows suit and hits the other tank in the command tank unit and takes it down to 1 hull point. Newly summoned the soul grinder phlegms at the command tank unit and wrecks the tank. With the melta guns in range of one of the tanks, shooting from the back hatch both of them miss. 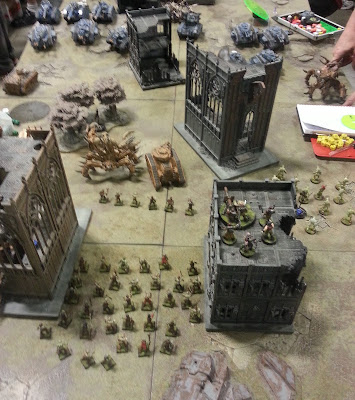 With a soul grinder in his lines, my opponent is forced to move this turn. The annihilators move forwards to allow the vanquishers room to move and face the daemon engine. To make sure it dies the exterminators also move to see its side armour.

Again overkill, but the annihilators shoot at a chimera and again explode it killing half of the troops and causing them to run. Looking like he is changing his plan, the exterminators shoot at the plaguebearers and just mangle the unit reducing them to the herald and 5 guys. That was very painful. Vanquishers then target the soul grinder on his flank and only get a single penetrating hit past his daemon save, and blows his claw off. He's alive but far less dangerous. The commander shoots trying to finish off the daemons but some how only kills off 3 more.

Nurglings deep strike in next to an objective in my back field as they can't do anything else this turn of use. His claw might be destroyed but with the soul grinder being strength 6, he can still try and damage the command tank. I fail to rally the running troops. The rest of my force moves up grabbing objectives and getting closer to his tanks. The herald and few daemons move to see the command tank but mainly stay hidden.

Psychic phase and the herald casts smite on the warlord tank but it can't do any damage, being strength 4.

Again battle cannon shots target the leman russ tanks opposite them but fail to do any damage. Shooting into the warlords side armour, both soul grinders shoot everything they have at it and take a single hull point off it. In a rather risky move the medusa tries to take it out, and it locks on thank god, but only shakes it, but its on a single hull point. I try to take it out with the demolisher but the shot scatters.

Assault from the soul grinder crashes into the command tank and the hammer of wrath attack is enough to wreck it, gaining slay the warlord and stopping the other tanks from having preferred enemy. But I will likely lose the grinder this turn. 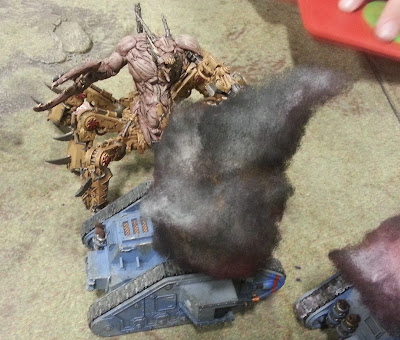 With the soul grinder exposed, the exterminators get into his rear and get ready to destroy him. On the left the tanks shuffle back as they are getting close to the infantry.

Shooting from the vanquishers explodes the demolisher with ease as the exterminators rip the soul grinder to bits wrecking it. With no real tanks in range the annihilators just target the infantry in front of them and kill about 6, so nothing too bad for me.

Again at the end of the turn he passes almost all of the it will not die rolls. 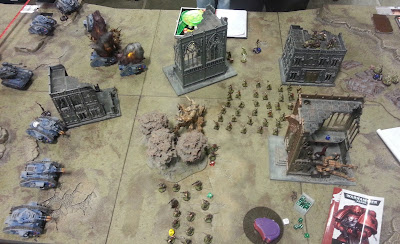 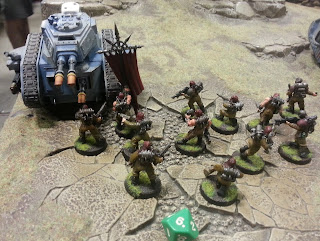 Moving though the cover of woods the remaining soul grinder gets into charge range of the annihilators while the infantry does just the same. The zombies waddle up while the running troops still bolt for it unable to rally.

Unfortunately the medusa is out of range so it can't fire. The lascannon from the command targets the exterminators but fails to do any damage. Again battle cannon fire does nothing.

Assault phase and the infantry charge into the annihilators and the soul grinder attempts to follow but stumbles in the woods and fails the charge. All of the krack grenades get thrown onto the tanks but only a single one gets wrecked and I take a single hull point off another. 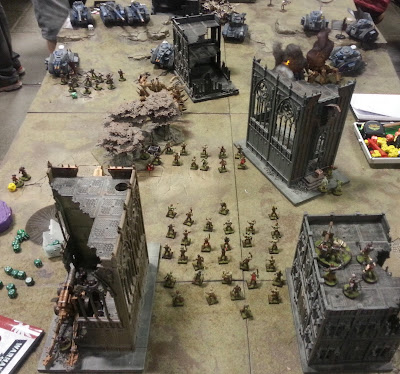 Turning to face the new threats, the exterminators face the zombies ready to remove them from the table. Moving back the annihilators reverse and avoid the infantry.

Vanquishers target my battle tanks and explode one. Firing all of their autocannons, the exterminators shoot the zombies and kill off the few that they can see. More over kill as the annihilators kill a hand full of infantry.

Stomping out of the woods the soul grinder gets very close to the annihilators while the infantry follow suit, not wanting them to escape this time.

Again the lascannon misses its mark, and the Medusa is out of range.

This time the soul grinder makes combat with the tank while the infantry swarm around its feet. The infantry wreck one of them and the other is exploded by the grinder.

No real movement apart from the hydra moving up.

Vanquisher squadron targets the soul grinder and blows it legs off while the exterminators kill off the infantry in his lines. 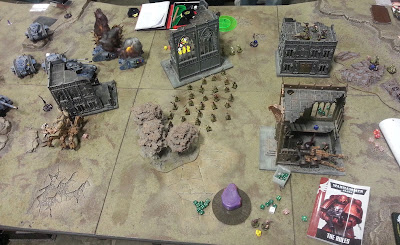 We roll to see if the game carries on...

I can't really do anything as my infantry is none existent. I just hold on objectives.

He kills off the soul grinder.

While I don't blame my opponent for how he played, as tactically it made sense to wait at the back of the table and wait for me. He out ranged me and had superior fire power so he did everything right in theory. However this is mealstrom of war and the cards aren't always kind. You need to be able to move about and grab objectives, not just kill the enemy. All game I just ran at him which was rather boring.

It feels like a hollow victory as I won thanks to good cards for me and bad for him. He was playing to the theme of the event which I can't blame him for, but I just didn't really enjoy this game. No real tactical thinking just run. Such a shame.

If I played this game again I would deep strike both soul grinders on the right and hopefully get rid of that flank while the infantry dealt with the anti-tank fire power.

So thats the end of the first game and I am up, winning 2 games to a single loss. Not bad.
Posted by Malduran
Labels: Battle report - 40K, Chaos Renegades