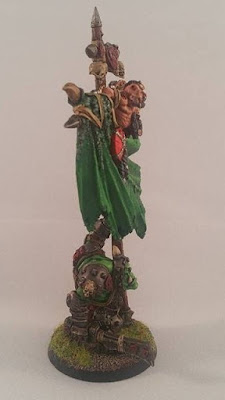 Recently I have had a little bit of time for painting so I have cracked on with a few things I have had needing to be completed. So I though I would just show you all what I have done, an orc bsb and some renegade heavy mortars.

A while ago I purchased the forgeworld Orc command, and about 2 weeks ago I finally started to paint the orc with standard. I had to paint all the bits separate in order to paint it up to the standard that I wanted to paint the guy to. Its been a while since I have painted something and done it as well as I can, which isn't great by a lot of peoples standard but I'm proud of how it looks. The model itself is beautiful and putting it on a round base for AoS really makes it look so much more imposing than on the little square base that it comes with. 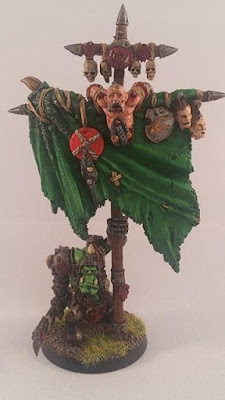 I have a feeling that the dead dwarf on the standard is meant to be a troll/giant/dragon/daemon slayer how ever I felt that an old royal dwarf would be more insulting. By painting him gray I can say its an old dwarf king, who has been shaven, an insult worse than death to the dwarfs. Plus who cares if I have hung up a slayer? It means he completed his death wish, and no one wants that. 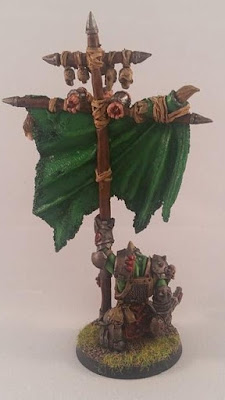 While I was painting the orc I felt that I needed something simple to do while I was waiting for bits of him to dry so I got out my heavy mortars. I have painted them the same way as my tanks, so nice and simple and fits in. And I have added a few little bits of chaos iconography to them to make them look more chaos than just looted imperial. 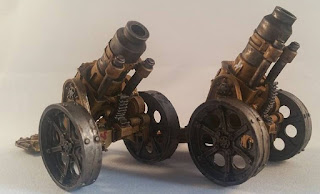 Anyway next on my painting list is some black orcs for AoS, then when they are done I might crack out some malifaux and finish a crew as I never did that last time I painted them. Its a plan. And I might have a monthly painting challenge again, to try and get my models painted! You all know you want to join me, and get a hand full painted each week.

I also have an instagram account for those of you who wish to see a few of my pictures early, just search for skulkers surprise and you should fine it.
Posted by Malduran
Labels: Painting