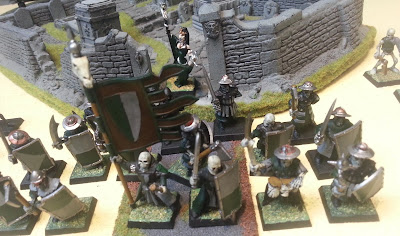 For my first Age of Sigmar battle report, I bring out the dead, with my Vampire count force against a swarm of Skaven. The Battle Plan is War of Storms, so we are both attempting to push our territory forwards while defeating the enemy general.

The table is played length ways, with our territory being half of the table. We are allowed to deploy 12 inches from the centre, and the defender deploys his entire force first, followed by the attacker. Victory goes to the player who has the biggest territory after 6 battle rounds (or if one territory expands the whole table).

At the start of each battle round both players roll a D6, who ever rolls highest expands their territory by 6 inches. If you wound the enemy general in your turn, your territory expands 3 inches. If he is killed it expands 18 inches (I think).

The skaven are defending this realm while the undead are attacking. The skaven set up first, spreading their units across their entire line. A unit of clan rats takes each flank and one in the middle pushing the screaming bell. The guns and storm vermin start behind this front line to plug in any gaps. Both the warlord and battle standard hide behind the front lines.

On my right flank the ghouls creep forwards ready to attack and on my left the black knights deploy. In the centre the grave guard hold the centre with the vampire behind them. Plugging in the gaps in my line I place a unit of skeletons each and a necromancer behind each.

Round 1 – Skaven win the roll

Hero phase and the screaming bell uses its command ability giving skaven units next to it +1 bravery and movement. The bell itself rings out and would cause mortal wounds, but no enemy units are in range, just it just makes a bit of noise. Trying to cast magic, the grey seer fails to cast arcane shield on the screaming bell.

The swarm move forwards, the clan rats all run, they want some new bones to gnaw on. The storm vermin move closer to the right flank while the guns get ready to shoot next turn.

Trying to gain extra hight, the plague mortar goes for a long range shot, and make it targeting the grave guard and a single model dies. 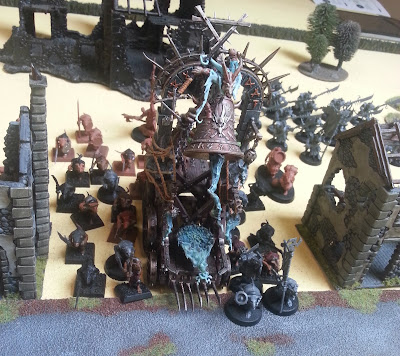 The single graveguard which was killed pulls back together tanks to the magic in their banner replenishing the unit back to full strength. Commanding the ghouls, the vampire uses his ability blood feast to give them +1 attack. Magic is very useful for me this turn, as the vampire casts arcane shield on the grave guard, a necromancer does it on the black kngihts while the other necromancer casts it on the ghouls.

Movement and the black knights push down the left flank while the skeletons follow them slowly. The grave guard and vampire move up a little, but are careful not to get too close if the clan rats try to charge them. On the right the ghouls move though the woods backed up by the necromancer and spear skeletons. In the centre the wraith runs forwards to disrupt the skaven lines.

I attempt to charge the clanrats on the left with the black knights needing a 8, but fail. 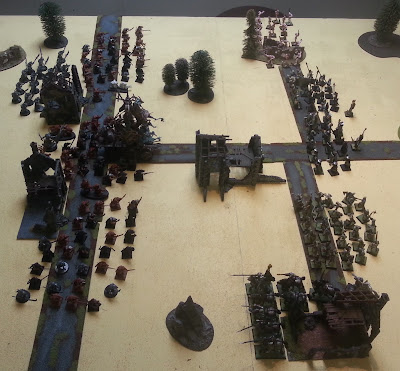 We roll to see who's territory expands and once again its mine.

The bell once again rings out but its in range of the undead, the wraith takes 3 wounds and 3 skeletons crumble to dust. Casting warp lightning the engineer kills off 4 of the ghouls. The greyseer again calls out to his fellow skaven boosting their movement and bravery. The warlord uses gnash-gnash on the clanrats next to the black knights, and the chieftain plants his flag to boost the combat potential of the skaven.

Movement is simple, the rats just get as close to the undead as possible with the screaming bell getting within 3 inches of the graveguard. The storm vermin are still behind the rats on the right and all the guns are now in range.

Trying to increase its number of shots the rattling gun tries to fill the knights full of holes but the gun explodes and deals 3 wounds to the model and kills them off. The warpfire thrower however fares better killing off 3 skeleton warriors. Plague mortar on the 30 strong unit of skeletons misses, other wise it would have done a lot of damage.

In the combat phase he activates the the screaming bell first. Its rusty wheels crushes only a single grave guard who is too slow to move out its way and the rat ogre is too bust ringing the bell to even hit. My first activation is the ghouls on the right, with 3 attacks each they mangle the clan rat unit and kill off 11. Back to the centre as the clan rats pushing the bell attack the grave guard next. Measuring they are in range of the wraith as well so they consolidate towards him and take off his last wound. Attacking the grave guard again only a single one dies. On the left the skeletons, while they weren't charged, are within 3 inches of the rats, so they pile in next hoping to do some damage and protect the knights, but they only kill 1. Those clan rats attack next and swarm over the skeletons and knights, killing off 5 skeletons and then dealing 3 wounds to the knights, so 1 falls and another is injured. On the left again I activate the skeletons as they are in combat range of both the clan rat units (middle and right) so they pounce on those two units, but unsurprisingly they only kill off 1 in the centre but 4 on the right. His last activation its the wounded clan rat unit on the right attacking the ghouls, but thanks to some lucky saves, only a single ghouls dies. Its all just my activations left so the knights go next and they were taken by surprise and only kill a single rat. The grave guard fare much better though and deal 8 wounds to the screaming bell in a single round of combat.

Battle shock and the only unit which loses models is the rats facing the ghouls, who lose an extra 7 models.

As I dealt wounds to his general, my territory expands 3 inches. 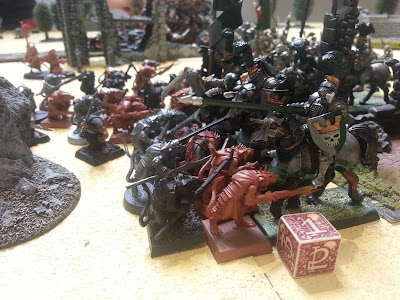 Hero phase, and again the magic binding the undead to his realm brings a few of the fallen models back to join the undead cause, and the grave guard and knights are brought back to full strength while a few skeletons stand back up. The vampire uses blood feast on the grave guard, then casts arcane shield on them, but the greyseer unbinds the spell with ease. Necromancers however have no one to stop them and cast dance macabre on both the grave guard and try on the ghouls but fails that spell.

All of my units are in combat so I retreat the knights and they move around the flank of the rats they were fighting ready to hopefully attack the weaker heroes behind his main line.

Combat and I activate the grave guard first, and they attack the screaming bell reducing it to a single wound and some models attack the clan rats, killing 4 of them. On the left the clan rats attack the skeletons and brag down 8 of them as I just can't roll armour saves. Ghouls next as they want to feast on more rat meat, and they drag down 3 of them (not having the extra attack hampers them). Clan rats attack the grave guard and kill off 2 more of them. I activate the skeletons on the left who kill off 2 rats. The bell activates and just can't do any damage to the grave guard. The guard activate a second time thanks to dance macabre and take off the last wound from his general, killing him. 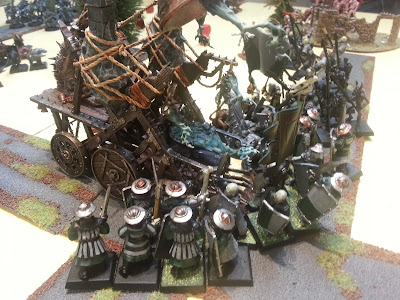 End of my turn and my territory expands to claim the whole board, making me get an automatic victory. Game ends.

Just the way the game ends when you claim the board is rather odd. I guess I see where they are coming from but I didn't win thanks to amazing tactics, just sheer luck of winning the dice roll at the start of each turn.

Talking to my opponent after the game he admitted that attacking the undead across the line was a mistake as all of my units could support each other and hold. However we both agreed that the Battle plan, while a great idea is more at fault than anything else. The random element at the start of each turn needs to go or just reduce its impact on the game (so say 3 inches, not 6). I say it should go though. For killing the general you should probably only get a 12 inch move not 18, and instead get points for doing stuff in the game. Such as killing a unit should gain you an expansion in your territory as that would help you boost your influence. Wounding the general is fine, its only a small boost and can stay.

We agreed that we will play the game again in the future with our different rules and see if it makes the game any more enjoyable.


A short first battle report for Age of Sigmar, hope you enjoyed it.
Posted by Malduran
Labels: Battle report - Fantasy