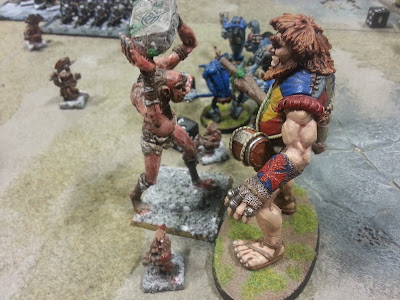 Old adversaries meet once more to settle grudges and avenge ancient wrongs. The Final game of Throne of skulls and the mission is War of Storms against a force of Dwarfs. We have to kill the general and hope the winds of fate blow in our favour.

War of Storms is an odd mission, at the beginning of each round we roll off and who ever wins expand their territory. The only other way to expand your territory is to wound your opponents general. Who ever has the larger territory at the end of the game (6 turns) or is one territory is the whole table that player wins.

I have more models than the Dwarfs but he out guns me and out monsters me. This will be a hard game.

We roll to see who deploys first, and I win, so select the dwarfs to set up first, and in this mission he sets up everything in one go. He sets up his Grudge throwers supported by the runeslords and engineers. The Quarrellers set up in front of them, with the gyrocopters in the woods to the right of them. Bugman and Ungrim set up in the woods as well. 2 Giants set up in the front and the 3rd gets to set up in a wood after me because he won his previous game. The dragon slayers set up all around his forces.

My deployment has the black orcs in the forest with Grimgor. The boyz set up just outside the forest next to the black orcs and the warboss with banner hold back. At the back of the forest the wyvern deploys to get the extra save, and the shamans deploy around the orcs. On my left the artillery deploy with the bully. In front of them the giant and trolls deploy.

With the dwarfs setting up first, the get to go first. 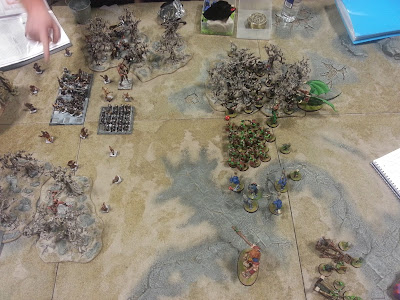 Hero phase and the runelords add rending to the grudge throwers. Ungrim inspires the Quarrellers.

Movement has the slayers all moving towards the orc lines as do the Giants. The giant behind my lines in the woods moves toward my general, aiming to take him out. Down my right flank the gyrocopters move down ready to try and disrupt my lines.

Shooting from the gyrocopters targets the savage orc shaman and deal 3 wounds to him. All of the grudge throwers target the Wyvern aiming to get an early lead turn 1, they all hit but thanks to positioning in the woods I save some, taking 9 wounds, still alive on 1. The ranger target grimgor, and after 2 volleys deal 3 wounds to him.

Combat is simple, the giant at the rear charges the wyvern, and at the front one charges Grimgor. The 3rd giant attempts to charge my giant, but he rolls a double, tripping and falling on two slayers dealing 3 and 2 mortal wounds to them. A few slayers manage to charge in as well. 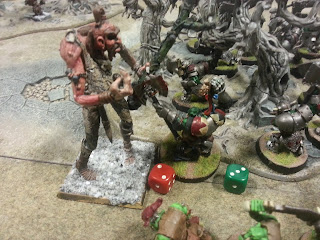 First the giant swings at the wyvern killing it with ease. Grimgor strikes next dealing 8 wounds to him with his axe. A slayer attacks Grimgor back and only manages a single wound. As the giant is so close to the orc boyz they get pulled into combat and deal 1 more wound to the giant. Before he dies the giant attacks grimgor but he only deal a single wound, leaving with 2. The black orcs attack all around as they are close to all the combats, they deal 5 wounds to the giant that killed the general, 1 wound to the slayer next to grimgor and 4 to the other slayer by the savage orc.

Battleshock, and with my general dyeing the line is pushed back 18 inches towards my deployment.

With my general dead I only have magic, the savage orc shamans casts shield on the black orcs, and the other shamans cast it on the orc boyz and stone trolls.

The giant and trolls move towards his giant on my left flank.

Shooting and I try to even things up, both the Doom diver and Rock lobber target his General Ungrim Ironfist. Both hit and both wound killing him in a single turn.

Charges and my giant charges into his, and the trolls back him up by charging the slayers next to it.

First my Giant attacks first, swinging his club he deals 2 wounds to his giant. Unfortunately next his giant kills Grimgor, to which my black orcs swing back into action and kill a slayer and reduce the other giant to 3 wounds. A slayer goes next attacking the trolls, and kill 1, the trolls kill off 2 more but they attack back before they die killing 1 more. Orcs attack next and reduce the giant who killed Grimgor down to 1 wound.

Battleshock and the trolls run for it. The battle line moves back 18 towards the centre of the table.

Again the shamans cast mystic shield on the black orcs and orc boys.

Both the rock lobber and doom diver target the quarrellers but they do no damage.

Battle shock and the black orcs all run apart from 3, who stays to fight the slayer next to him. 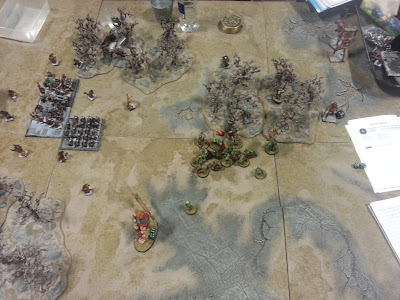 This turn the Runelords add rending, one to the Quarrellers, the rest on two grudethrowers.

With the orcs possibly getting out of combat soon, the quarrellers move back away from the orcs. The rest of the slayers move towards the orc lines getting ready to charge.

Shooting from 2 grudge throwers targets the artillery killing the crew on both machines. The 3rd targets my giant killing him, but he falls onto the slayer who dealt damage to him killing him. With the extra rending the quarrellers target the orcs and bring down 11 of them.

Combat has the slayers charge into the orc lines, killing all but 1 orc and finishing off the black orcs. His giant charges the orc with banner but fortunately doesn't kill him.

All of my shamans attempt to arcane bolt the remaining giant but fail to kill him.

The bully moves away from his lines as I need him to live.

In combat I lose every one who's in combat.

The slayers get close to the shamans.

Grudge throwers target the bully killing him and the slayers charge the shamans killing them.
At this point I have no models left and lose the game.

This game was rather one sided I feel, I just didn't have enough to deal with 3 giants, 3 grudge throwers and 12 slayer characters. If his giant didn't have the ability to set up behind my lines I might have been able to deal with it a little bit better. My black orcs were definitely the unit that I needed to do the heavy lifting this game, and being pulled in 3 different directions really didn't help them.

A few things that I took from getting my ass handed to me are that I needed a fast unit to get into my opponents face and distract them. Maybe a large number of Boar boyz or a couple of chariots might make the cut. Thinking about it while I'm typing this a unit of 3 Boar chariots would really help, they are fast, have a relatively large number of attacks considering they are a single model. They might do some extra mortal wounds on the charge which is another bonus... I will be repainting my chariots soon.

Anyway this was my hardest game to play, seeing his force my heart just wasn't in it. I'm not going to say that his force was over powered or out of the spirit of the game as that's just pathetic. But after talking to him it was obvious that we came from two very different backgrounds with the game. His game group plays much more seriously, using the most powerful units in order to murder their opponents, and they enjoy that, which is great. But my group go for theme, using more themed lists which aren't always the most powerful, and that's just how we do it. I'm not saying one is better than the other, but when two groups like that meet, it never ends well.

Anyway I enjoyed the weekend on a whole and I would go again after waiting a while. I couldn't do this on a regular basis but maybe in a couple of months I would do back again. But it would depend on the theme, I liked Rotwater Blight, it was a cool idea but the next one is Trials of Archaon which doesn't appeal to me very much.

Having the only limiting factor in the games being number of models didn't quite work, as some people only took basic troops, other saw no point in this so only took elite units then other just said bollocks to it and took half a force of characters. I was amazed no one went full monsters, a few people had a couple (mainly the Seraphon) but it was nothing dramatic. Still some sort of other balance has to be used. How to balance it, I really have no clue, as I only can come up with using percentages for characters and monsters. Say a max of 10% Heros and 10% monsters, so out of 60 models you could have 6 heros, 6 monsters, then 48 models of anything else. Still 6 monsters is ALOT of monsters, so maybe 5%? I really don't know. I just hope GW can come up with something instead of just leaving it as model count.

This is my last post on the Throne of Skulls event, and I hope you all enjoyed it. It will be back to 40k for a little while, I need to paint up some more Renegades, then hopefully I will still have a few Age of Sigmar posts.
Posted by Malduran
Labels: Battle report - Fantasy