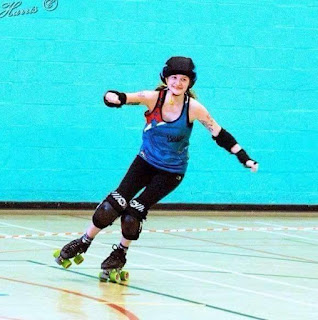 This is rather off topic but I feel its a rather important post all the same, and I wanted to share with all of you. A few days ago I found out that a friend of mine decided to end her life, apparently she has suffered with depression for a very long time and finally lost her battle, and decided to end it. A massive hole has been left in all who knew her and I feel like I need to write this post so that it might help some one in the future. Please read though what I have to say, it might not help you, but it might help some one you know.

First I think it would be best to talk about my friend who ended her life, I say ended her life as the world Suicide feels dirty, and horrible. I know the whole affair is rather upsetting but saying 'ended her life' makes it less so. I knew her from my Roller Derby, so I will share that name with you, the name she took was 'Princess Harmstrong' and her number was 50. I have played roller derby for about 18 months, and training is twice a week, 2 hours each session, for for 18 months, 4 hours a week (minimum) I would see her and talk to her. I can't claim that I was a close personal friend but I would like to think that I was a friend never the less, and it really was a pleasure to talk to her. Hell during my initial freshie training she was my goal to be like, she was better at everything and I used her as my yard stick.

The hardest thing to understand was that she was always happy and smiling. I never knew that she had such a battle raging inside of her the whole time I knew her, only after the event did I find out why. Its bloody crazy! But appearances aren't everything, I don't know if many people know, her family did and maybe a few friends? But to every one else, nothing. She loved her Roller Derby, her family even said its what kept her going, and he travelled a lot. She just appeared to have everything going for her. I'm sorry I'm repeating myself but this isn't going to be edited, I'm just typing this out as I think of it, I think it might be helping me, I don't know. She was 21 when she ended her life, which made it even worse and unexpected.

Regardless Harmstrong didn't appear to seek out aid for her battle, and untimely lost. The point of this is to honour her memory and try to help out anyone else who might have a similar struggle that no one else knows about. I'm not going to pretend that I know what I'm talking about, I'm no doctor or health care worker, I'm just a friend devastated by loss. Hell I'm crying while I write this, all sense of dignity is lost. From my limited research online and what the others who feel the same way have shared with me, you really don't need to suffer alone. I'm not saying its easy, hell its probably one of the hardest things in the world to do, but please reach out and ask for help if you need it.

If you can talk to family and friends, I know they will help you in any way you can. That's great and please do it, but if you feel embarrassed by telling people you know, or you think that you can't tell them for one reason or another, that's fine, don't feel bad about that just talk to some one else instead. Currently in the uk we have a number of different outlets for this, and I really do ask you, if you need to talk to some one and you have no where to turn, please talk to one of these people:

Your GP, go to your doctor and talk to them, they have several options available to you, I even phoned mine to find out what they can do. This is the most medical option, and drugs are possibly even available, but I would rather suggest that you just talk. They also have counselling available and group therapy which I hear help people out.

TheSamaritans: You can click to view their website or if you need to talk to some one right now, phone – 116 123, its free to call and you don't even have to talk about depression. If something is troubling you just phone them and talk to a stranger, and it doesn't matter how silly it sounds to you, they will still talk.

Another such organisation that you can phone and talk to is called Mind, and its the charity that my team are donating to. If you need to talk to them you can phone them, and talk about what ever is troubling you.

Now I don't just want to talk about depression, something else that is very important is if something does happen, and you don't know how to deal with the loss of a friend or loved one. When Harmstrong ended her life, I was very lucky to have a team full of people I am able to talk to if I need to, but more importantly my amazing girlfriend was there to help me, and I was able to help her. But I know that not every one has such a supportive network that can help, and I have found some one you can call if you need to talk and deal with loss, The Survivors of Bereavement, and you can look at their web site or phone them on: 0300 111 5065 between 9 and 9. 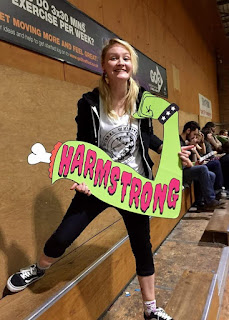 Still if you aren't feeling yourself, and you haven't in a while, or you are having horrible thoughts going through your head and you can't carry on, please reach out and ask some one. The Princess didn't and it ended badly, so please don't let history repeat itself. Look after yourself, talk problems though, go see a doctor, don't just end it all. You might not think the world will miss you if you end it, or its the easiest thing to do. #50 left a massive hole in a lot of peoples hearts, and will always be missed, please don't just end it, people do care.
Posted by Malduran
Labels: Article