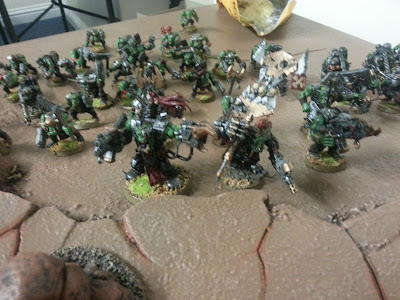 Last week I finally decided to go and play at my local gaming store as they have started a late night gaming which I can easily get to. Not knowing what the attitude towards gaming is like there I decided not to use my evolving list and instead took a very simple list with no allies. I played against an ork army in a game of purge the alien 1500 points.

Before I begin I want to point out that I lost my notes for this game and most of the pics turned out blurry so it’s not up to my usual standard, I apologise.

So this list was very simple. Loads of troops, loads of strength 6, combat in the form of the avatar and the wraithguard to kill scary stuff. Another reason for this list is its mainly painted, with only a few bits of it just sprayed purple. This was also a deciding factor in what I took.

The guy I played was called mike, a nice guy and he quickly knocked up a list to play against me. So this is his 1500 point ork army (as far as I remember).

I have a lot of bodies to worry about here but luckily I have a lot of scatter lasers. I don’t think I have every played against orks before but I do have an ork army, so I think I know what I have to target first.

We just used the terrain as it was set up, with buildings on my left hand side and quite an open ground on the right. We rolled for deployment which was dawn of war, and mission purge the alien. So its kill points, we have the same number of units so it’s fine.  (we forgot about warlord traits).

He wins the roll to go first so set up with the lootas on the far left, the bikes in the built up section of the board, and everyone else out in the open.

I counter this by ignoring the built up section and try to get most units out of range of the lootas. As they are in a building it will take them two or three turns to get anywhere useful. I hide a unit of guardians out of sight but able to shoot orks while everyone else set up on the open right had side. The wraithguard have the farseer with them and set up front with the war walkers behind them. The avatar goes forward flanked by dire avengers.

Night fight: No
Steal: No

The ork horde swarms forward lead by the deff koptas who go after the avatar. The bikes go forward trying to flank me.

In the shooting phase the deff koptas shoot at the avatar and manage to do 2 wounds to him, about 3 of the lootas are also in range of the avatar and steal another wound from him. Trying to finish the avatar off the big mek targets him with hsi shock attack gun but with a double 1, the big mek explodes and kills a lot of orks within 6 inches (first blood me I guess). The rest of the army runs.

With the orks getting close I cast fortune on the wraithguard and guide on the war walkers. I move up the wraithguard towards the deff koptas as does the avatar and dire avengers and a single unit of guardians.

My shooting phase isn’t great as it takes the guided war walkers, the wraithguard, the falcon and the guardians to kill all 5 of the deff koptas. But I needed to kill them so my war walkers don’t get killed next turn. The rest of my army takes down a hand full of orks. 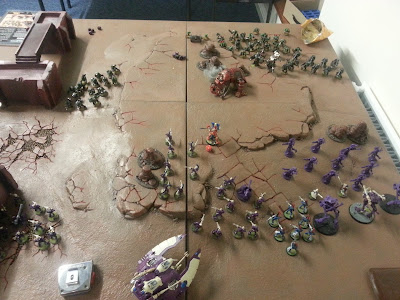 Once more the green tide moves forwards, the bikes turn round to be able to do something next turn.

The army runs forward (very close now), while the lootas manage to get 2 shots off on the avatar bringing him down. Damn. The shoota boys on the left kill a hand full of dire avengers. 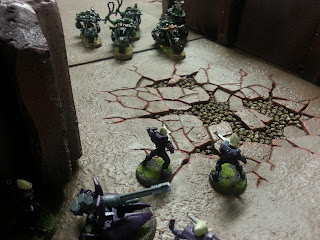 I didn’t have much movement to do this turn as they are practically upon me. I do the same powers on the same units. The guardians on the left move into sight of the lootas so they shoot at them instead of the dire avengers.

The wraithguard shoot at the nobz killing 4 out of the 5 while the war walkers shoot the burna boyz killing all 8. The dire avengers and guardians shoot at the shoota boys and kill a few more. 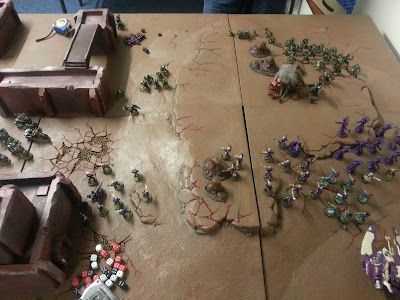 It’s crunch time and they move to get favourable charges. 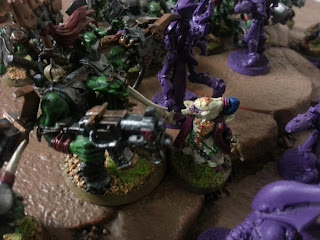 A few units do shoot first, the bikes and lootas do a lot of damage to the guardians but are then finished off by the shoota boyz. The slugga boyz shoot the wraithguard but do nothing. 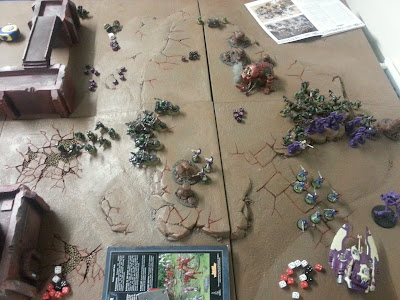 In combat the wraithguard kill the nob with power klaw and a few boyz. The warboss however kills 4 wraithguard. I hold, but my numbers are getting low.

The few shoota boys move forwards and shoot at the small squad of dire avengers. They get lucky and kill them all.

Combat and the warboss kills off the rest of the wraithguard. The warboss moves forward with its consolidation as do the boyz who get a 6, making it towards my deployment zone.

Seeing an opportunity I move my falcon forward and get out the fire dragons. The dragons shoot at the warboss reducing him to 1 wound, then the falcon finishes him off. The dire avengers move and kill the last remaining shoota boyz while the war walkers kill a full half of the remaining slugger boyz (including the nob, from some bad positioning).

Combat and I charge the slugger boyz with the war walkers but I fail most of my attacks and only kill 1 boy. They hold however.

The lootas can just about target the remaining dire avengers and kill them off.

Combat phase, and the fight continues on quite uneventfully.

As it’s potentially the last turn I don’t want to throw it away, I think about charging the fire dragons into combat to help the walkers but decide against it as they would likely die. So the combat continues, I kill a few orks but they hold again.

We roll to see if the game carries on... It doesn’t.

Well if nothing else it was good to face a new opponent and a new army. A draw, well that was better than a loss. Could I have played it better? Probably, instead of sacrificing the guardians I should have had a strong right hook, and decimated what he had on the right before turning and going after the rest. But never mind, live and learn.

Next time I go I will use my evolving list, there was no issue with unpainted models so I will give it a ago. However I will have to be careful about getting into combat with the wraithguard. I say this because looking at the armies that we had at the store were:
·         Orks x 3
·         Grey knights (I have never played against grey knights before)
·         Blood angels (In the form of flesh tearers)
·         Chaos space marines
·         Sisters of battle (never played against them either)
So that's a lot of combat armies.

Again I'm sorry for the lack of detail in this report hopefully everything will be back to normal next week. To make it up to you, here are a few pics of the games going on around me.