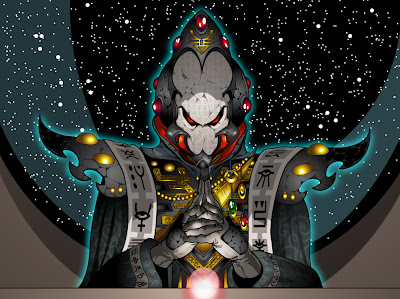 With the tournament getting every closer i keep getting worried whether or not my army list is good enough to be able to hold its own against the other armies out there. I am going to be taking eldar, pure eldar at that, as its only 1000 points. Is this list any good though? click and let me know what you think.

With this list i would have the farseer manning the lascannon hopefully taking out any big flyers or av 13-14 tanks at the starts. the guardians and rangers would hide behind the defence line while the fire dragons go hunting on their own.

I would have preferred a quad gun but i need the points elsewhere, i potentially could reduce the fire dragons down to 5 each but in my experience 6 is a better number because half always seem to miss. Might just be my dice though. Let me know what you guys think, an help would be great as this is my first 40k tournament and i have no idea what is coming.

So this list revolved around the fire dragons on the quad gun taking out light tanks and flyers while the wraithlords and war walkers take apart the enemy. I just have to be careful with wraithsight and putting the walkers in the right place.

Which do you think is better?