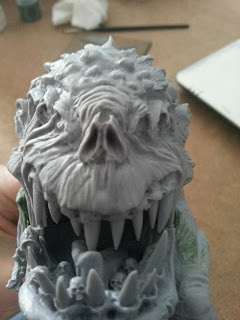 So this squig has been a real learning curve for me, forcing me to try a few new things to just put the model together! i can only wait to see what paining the bugger will uncover. But i'm getting ahead of myself. After i put it together and used liquid greenstuff (see yesterdays post) i tried to stick the squig to the base. This didn't end well.


With this new trial in front of me i decided to try something new, pinning. While i have heard of this before i have never done it. I looked up a few tutorials on how to do it on youtube and it seemed possible for me, and all the tools that the guys used i have had knocking about and never really used. So with this at my disposal i had a crack at it myself.

1.Before i do anything i need to find something to use as a pin, it was suggested using some fancy rod, but fuck it i got a paper clip, its not as fancy, but my god it will do. I wasn't sure how long it would be so i cut two lengths that i can cut down later if its too long.

2.Using this tool i have had for a long time (I have no idea what its called) I made a pilot hole in the foot. I wish i knew this because its been a real ball ache in drilling holes with out a pilot hole in the past, this just stops it slipping around. After this i drilled two holes in the foot so i can place the pins in later. 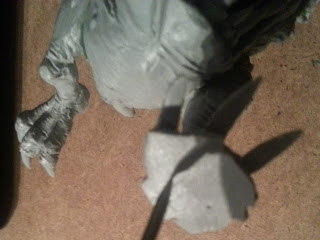 3.I glued the pins into the holes using super glue and left it to dry. Once this happened i put a blob of paint on each of the pins and placed the foot on the base to know where i need to drill. 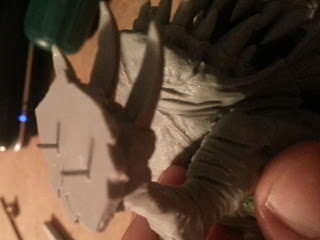 4.I drill the holes in the base and glue down the foot.

After leaving the foot to dry, the squig seemed quite stable and lasted a good 4 hours but then fell over, braking the spears in its leg. Not a great result after that. So i added a 3rd pin and everything seems good at the moment. Lets just hope it stays stood up.

I know this isn't quite the tuesday post i normally do, its a lot shorter, but hopefully i will be back on track next tuesday with something of a little more substance.
Posted by Malduran
Labels: Painting