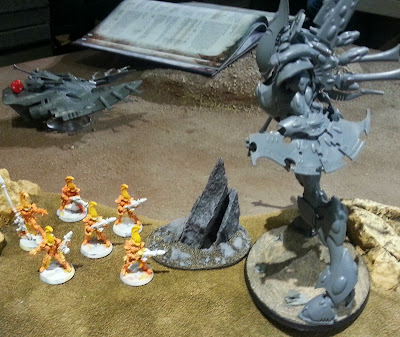 Once again the Craftworld of Iyanden gets in the way of the glorious craftworld of Dem-Kirath so must be put in their place. The loss of Eldar life is regrettable but necessary for the future of the craftworld. If you hadn’t of guessed, it’s some Blue on Blue action, in a 1500 point game of Purge the Alien, with vanguard strike deployment.

In this game is use my current evolving list

The Iyanden spirit host consists of:

WraithKnight (Warlord: The undying flame) aka re-roll saves until you fail one
Scatter laser, suncannon

The biggest threats to me this game are definitely the wraithknight and the crimson hunter. While the suncannon won’t do much to the tanks, if can punch my skimmers out of the sky so I will have to watch out for that. Again the crimson hunter is another unit that can seriously damage my tanks. The rest of his army should be ok if I stay away from it. However the wave serpent might be a little more difficult.

We rolled for mission and got purge the alien, and vanguard strike deployment. Iyanden won the roll for deployment zone and then again won the roll for first turn/set up first. He deployed in the top left hand corner of his deployment zone, hiding the weapons battery behind a hill and setting up the wraithknight, wave serpent and wraith lord at the front ready to attack. The spiritseer went with the wraithguard behind this line. Both the swooping hawks and crimson hunter went into reserve. 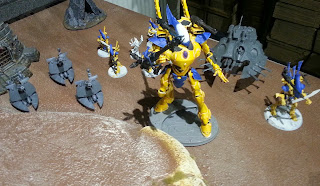 To counter this I set up my war walkers on the far right of my deployment zone backed up by the wraithknight. Using its range to its advantage the fire prism went right at the back to avoid being hit and the wave serpents were placed just in front of it but I made sure they were out of range of the weapon platforms first turn.

Infiltrators and he set up his rangers in the hill between us and I forgot I even had any (in fact I won’t learn I have rangers in this list till next game, after it’s finished, stupid me).

Awakening the spirithost the spiritseer casts voice of twilight granting all the wraith units battle focus. Seeing clearly the wraithknight jumps forwards towards my lines while the wave serpent moves across the top of the table. The wraithknight follows the two units slowly.

A few sniper shots from the rangers target the wraithknight and manage to roll 2 wounds, but none of them rend and he saves them. Running first, then the wraithlord shoots at the war walkers and manages to get a single penetrating hit (thanks to stopping 2 with the power field) and the front walker is shaken. His wave serpent fires just its scatter laser at the war walkers but it fails to do anything to them. To finish the turn the wraithknight shoots at the war walkers but it can’t do anything to them with its scatter laser, and its suncannon scatters off and hits a wave serpent twice, but it can’t get past the tanks armour.

In from reserve comes the crimson hunter but the hawks are still yet to make an appearance. On the far right the hunter comes in gunning for my fire prism and turns to face it. The wave serpent carries on its course across the top of the table and to my surprise the wraithknight gets closer to the wraithguard wave serpent. The spiritseer casts protect and falls back with his wraithguard.

Monofilament webs come down from the sky and surround the war walkers wrecking 1, damn shadow weavers. The wave serpent finished off the squad causing the last walker to explode. Laser and lance shots from the wraithlord target the wraithguard wave serpent but the pilot jinks out the way (3+ cover save, awesome). The wraithknight gets desperate and attempts to glance it to death with its guns but fails to get past the jink save. Finishing the turn is the hunter on the fire prism and it only manages to get a single glance on the tank.

To my surprise he doesn’t charge the wave serpent...

Shooting starts with the wave serpents both on the wave serpent and failing to do anything to it. The fire prism hits and penetrates it with its lance shot but the serpent shield reduces it to a glance. In a desperate attempt to finish off the tank the wraithknight shoots at it but again fails to do anything to it. The wraithguard in a rather desperate attempt try to take on the wraithknight, all shots hit, and 4 wound (even the spiritseer gets a wound with a bladestorm!) and I get lucky to get a single instant death wound. He takes his invulnerable save... it’s a 2! Wraithknight gets sent to the warp and is no more! Slay the warlord.

Dropping in the hawks grenade the wraithguard but do nothing to them, they deepstrike on the left hand side of the table. The wave serpent moves 6 towards the wraithknight and drops off the fire dragons who move even closer. Carrying on its course the crimson hunter moves behind my tanks.

Again monofilament death floats down from the sky this time hitting the wraithguard and their transport. 2 glances on the wave serpent are jinked off, but the wraithguard lose 3 of their number to psudo rends. Lasers from the hawks attempt to finish them off but they are saved. Using battle focus the fire dragons run at the wraithknight then shoot it causing a single wound. From the other side of the table the wraithlord manages to snipe a single wraithguard with its brightlance. Hitting it in its side, the crimson hunter takes a hull point off the wraithguards wave serpent. Wave serpent on wave serpent action again, and once again nothing happens.

Protect is cast again on the last remaining wraithguard and then they get back into their serpent to stay safe. The two guardian serpents turn to face the crimson hunter while the prism carries on hunting its tank pray.

The combined fire of two wave serpents it more than a match for the crimson hunter and its gets wrecked. Twin-linked serpent shields are nasty. Finally the fire prism gets the last hull point off the wave serpent and it’s wrecked, finally. Shooting from the wraithknight on the fire dragons kills all but the exarch who runs for his life.

The fire dragon carries on running. Willing to sacrifice himself for the greater good of the craftworld the wraithlord moves towards the wraithknight. The wraithguard move forwards towards my army.

Shooting from both the wraithlord and shadow weavers targets the wraithknight but nothing happens. 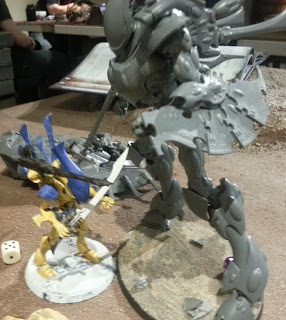 All of the wave serpents move towards the swooping hawks while the wraithknight goes straight for the wraithlord.

Only 1 wave serpent can see the hawks so shoots at them and kills 2, the other 2 serpents boost to get in line. A lone shot from the fire prism kills a single wraithguard.

The coward fails to regroup and carries on his way. The swooping hawks skyleap to safety and the wraithguard hide behind a hill.

Shooting from the shadow weavers fails to do any damage.

In combat the wraithlord is ripped apart by the knight, no questions asked.

Shooting from the wraithknight kills off all of the wraithguard, and instant kills the spiritseer. A wave serpent kills the fire dragon exarch.

That went very well for me, but I do feel a little bad as from the start he didn’t really have the weapons to crack open my tanks. Then getting lucky and instant killing his wraithknight was the final nail in the coffin, with that gone he didn’t stand a chance. What I’m surprised about is that he didn’t send with wraithguard forwards, yes they might have died to the wraithknight but with conceal and the other threats they might have forced me to make some hard decisions.
·         Wave Serpents: Hard as hell, we always knew that though didn’t we.
·         Wraithknight: While not idea getting him into combat he can hold his own against small squads or single monsters. I won’t do this every game but when its needed I won’t hesitate to throw him into combat.
·         Guardians: didn’t even use them this game, which makes me think am I wasting points? I will see after another game or 2 with this list.
·         Warlord traits: I don’t know why I bother with the eldar ones as I never seem to get useful ones, I might have to start using book traits and see what happens.

I did feel bad using this list though, it seemed very much point and click, while I didn’t get this list off the internet, it does feel like a NETlist which really isn’t my style, I prefer to make my own and steal Yeemans. I will play with it again but if it’s the same next game I might drop the list and come up with something new.