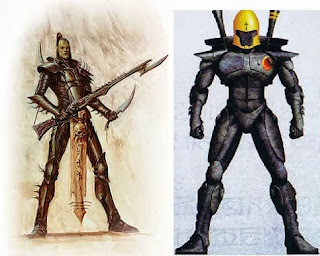 Untill the release of the 6th edition Eldar Codex I used dark eldar allies to help fill the gaps in my old army lists. This mainly took the form of some dark eldar warriors and a ravage, as with the old 4th edition book anti-tank weaponry was vastly expensive. Now I have found myself wanting to reintroduce the dark eldar into my lists but instead of using them as dark eldar, I was contemplating using them as rather unusual aspect warriors instead…

With the eldar stat line now being made consistent across the board (still a mistake in my book), the eldar and dark eldar have practically the same abilities. The major divergence between the 2 is their weapons and special rules. Now while the equipment is easy to explain away as aspect weapons, the special rules are a little harder. While the eldar have battle focus, the dark eldar have power from pain. Ok how’s this to explain it? Instead of power from pain, letting the warriors get more powerful as they kill more, Focus though Victory: Unlike the other aspects the warriors of XXX are slow to fully awaken their abilities in war. Instead they become more aggressive and focused as the enemy are shattered by their attacks. Not great I know but it will do for now. If you have any better reasons I would love to hear them.

Now before I go to much into it I have to some not all of the dark eldar units are going to be able to be explained away in this manner. Grotesques and wracks are defiantly not going to be able to go the way of the aspect warrior, and haemonculie are also going to be a tough one. The tanks might be a difficulty but the flyers and troops should be easy. I just had the image of the beast masters being represented by a guy on a similar hover board but instead of leading warp beasts, the using the high elf lions. Just a though.

The first units I have come up with are the basic dark eldar warrior, and the dark eldar wych. Let me know what you think of their explanations:

Eldar myth tells many tails of a dangerous snake, small in stature but with the ability the launch its venom long distances. If a warrior would find himself within spitting distance of one of these snakes, they would die to the venom long before they even saw the attacker. The first of these snakes was called Antheri, the father of snakes. It was said he was one of the most powerful beings in the galaxy, able to fire his venom of unimaginable distances, and venom was so potent it could kill a god.

Khaine saw this as a threat and challenged the father of snakes to combat but the father of snakes never appeared. Antheri went into hiding forcing the god of war to search for the great beast. When Antheri was finally found and trapped the great snake attacked, aided by many of his children. The snakes venom could not get past Khaines armour, and many of the great snakes children perished under khaine’s blade that day. Driven into a mad fury at the sight of so many of his children dieing, Antheri attacked and sunk his teeth deep into khaine and penetrated his armour, injecting his venom deep into the god. The venom was powerful but a single bit could not fell such a warrior and with a weakened swing khaine took the head of the father of snakes.

It is this mythical snake that the spiting serpents base their aspect upon, using poisoned weapons to take down even the strongest foe from afar. Unlike the father of snakes who perished when emotions took hold of him, the spiting serpents are cold and calculated, even for the Eldar. When going into battle they wait in ambush for their targets and using hit and run tactics move away from any aggressor. Their armour is not as sturdy as most aspect armour allowing them greater movement to slip away from their foes without any noise. Their chosen weapon of war is the venom rifle, which fires small needle tipped capsules which upon hitting a target will inject the serpent venom.  The training of the serpents allows them to spot the weak areas of opponents armour allowing their venom to strike. So well trained are the spitting serpents they can even hit the chink in the enemies armour in total darkness.

If I did convert these guys up all I can think of right now is using the guardian body, put on the dark eldar arms (not greatly different I know) and then come up with a different head. Not sure what I could use for a head but it would have to be something to mark them out as different.

A rather rare aspect warrior, that can only be found in only a select few of the craftworlds are the Dancing blades. The phoenix lord of this aspect choose only a few craftworlds to hold her shrines as she deemed many to be unworthy of her gift. Her reasons are her own and known to no other. The dancing blades believe that the best offense is an impenetrable defence, allowing your opponent to make mistakes as you dance armour their clumsy attacks. When the attacker finally opens their defence, that is when the dancing blades strike with pinpoint accuracy slaying their foes.

The wargear of the dancing blades is very limited, with them favouring ability over weapons of war, for if a warrior is not a weapon themselves what use are they? Dancing blades are the most lightly armours of all of the aspect warriors, wearing very little protection in favour of manoeuvrability and speed, very few even wear helmets as even the most advanced of eldar technology can still cloud the senses. While this may seem like a great risk it is in the melee of combat that the choice of manoeuvrability over defence can be seen. With grace and speed the dancing blades will dodge, duck, dip, dive and dodge the enemies attacks, in a dance only ending with the death of their foe. If they woe the heavier armour of other aspect warriors they would surely be caught be a lucky blade.

The ability to dodge an attack is not the only skill the blades possess, they also periodically train in 1 o 6 other techniques to better aid them in combat, these are also invaluable aide on the battle field.

I am not 100% sure how I would model them, but I have been liking the look of the new dark elf witches. Maybe add a few of the helmeted dark eldar wych heads, I do love those heads. Not really sure.

So what do you guys think? Would you have an issue facing units like these if they were explained to you what they were before the game? Or do you think this sort of thing is best left out? Would love to hear your views.