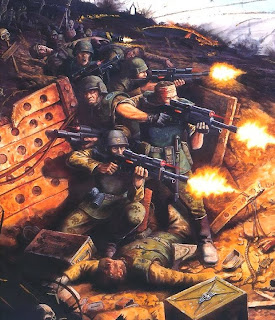 I now have a copy of stronghold assault, and I’m quite amazed by it. When both stronghold and escalation were announced I expected escalation to be the one that captured my imagination and leave the other in the dark, but it’s not happened. While I appreciate how game changing escalation is, I am seriously considering some of the fortification networks we can now buy.

Now I am not going to be taking any fortifications for my eldar, it’s just not the style of play I like with them (though I have been known to use a defence line once or twice) where this really comes into play is for imperial guard. It’s probably more for a theme reason but I just love the idea of a defence force, and as my guard are renegade it makes sense that the imperium would be coming after them, as once you take a world you need to dig in a get ready for the counter attack.

As my guard is still a fledgling force I have a lot of options to advance it further in whatever direction I want. So if I wanted I could create an artillery force backed up with fortifications. A couple of manticores or basalisks, two infantry platoons manning the fortifications and maybe an inquisitor with servo skulls to make the barrage more accurate. Not exactly a scary thing to face but I like the theme. For fortifications I like the Imperial stronghold, allowing me to use a bastion, defence line and even an honourific imperialis. Again with the guard being not of imperial favour any more it would be a fun modelling challenge to chaos the bastion up without going overboard with spikes (yes GW you use too many spikes). Most of all it would be great to defile the large space marine statue, take some chunks out of him and maybe hang off some loyalist guard from chains bolted into it. For the Aquila I was thinking having a sacrificed model in the centre of it inside a chaos star, blood and maybe little candles around the corpse to really give it a look of being defiled. It just fits the theme better.

For an actual army list though I’m not sure what to do, this is the first list that I bolted together with all the things I want in it, but it will defiantly struggle against any super heavies that it comes across.

The plan is to have the command squad on top of the bastion, so i have 2 BS 4 lascannons and the heavy weapon team will be inside the bastion shooting at what ever needs to die. I will hide what guard i can behind the defense line and probably blob them and add in the inquisitor.

Ok so it doesn’t have everything that I wanted in it, unfortunately at 1500 points you always have to make some sacrifices and deal with it. That being said I’m very happy with the list, even if I don’t have much of a defence line feel. More of an artillery out post but still I like it. While I know the Inquisistor is a terrible inclusion to the list I really love the idea of a very radical or even a corrupted inquisitor helping the force for his own gains, hell, he may be the reason the whole force fell to chaos. Got to keep an eye on those inquisitors.

The number of infantry squads and heavy weapons I have should be able to deal with most enemy unit, but I will struggle against AV 14 or a Lord of war as I only have a single BS 4 lascannon, 3 BS 3 lascannons and the artillery. Still it will be a fun list to play with (I hope).

What ideas have you come up with from the new books? It would be great to hear your ideas.
Posted by Malduran
Labels: Army List, Chaos Renegades