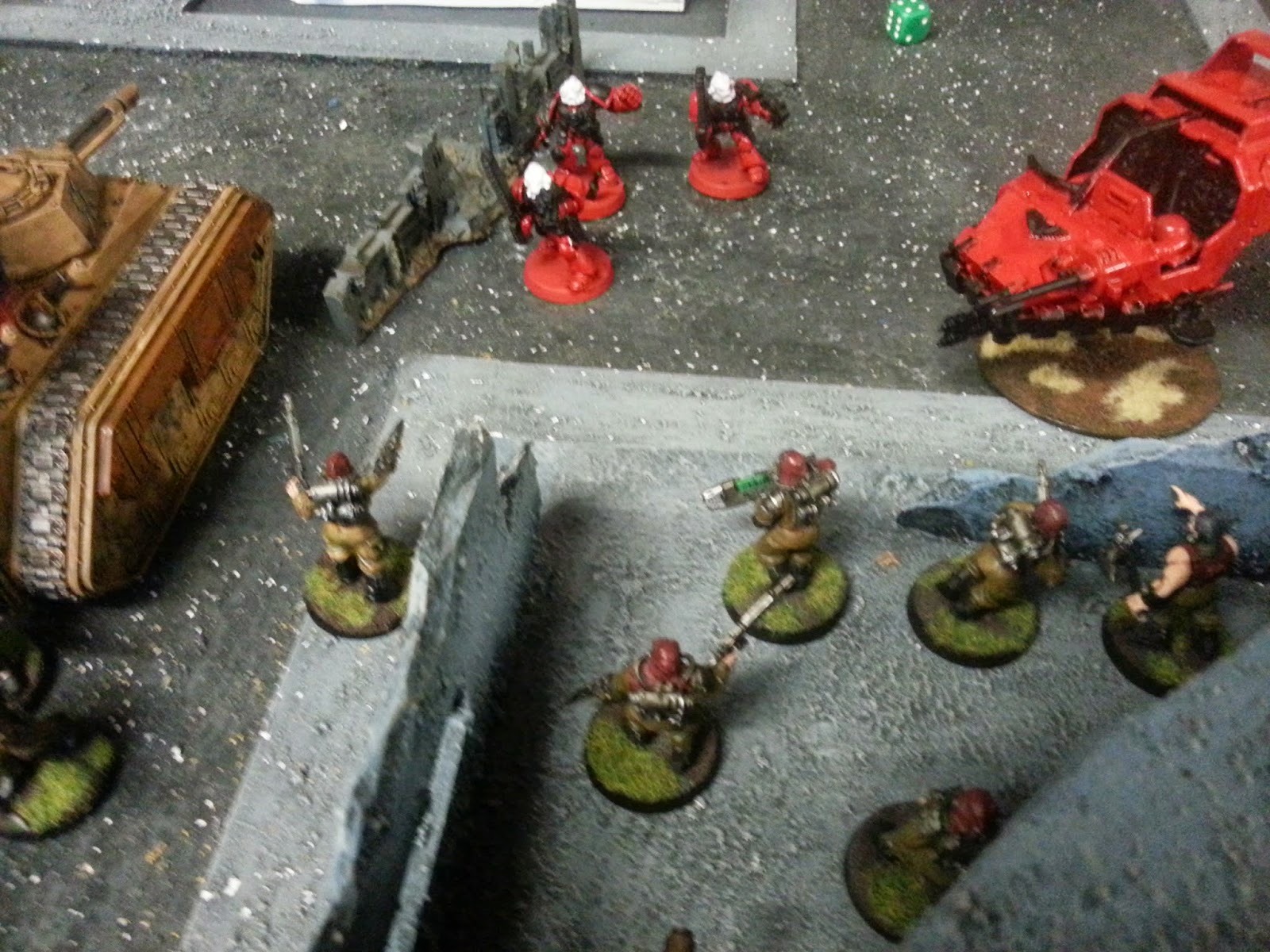 Game two of the 600 point escalation and after the fall of the Imperial Knight the Blood angels are sent in to reclaim what they can of the knight. The game is Emperors will, Imperial Guard vs Blood angels 600 points.

Rolling for mission we get Emperors will, and for ease (as its only 4 x 4) we use dawn of war deployment. Rolling for deployment zone I win the roll and select a side and we place our objective markers. Mine goes on the middle floor in a ruin in my deployment zone, and the blood angels place his on the top floor of a large ruin in his deployment zone.

Rolling for first turn the imperial guard win and deploy an infantry squad on my objective with the autocannon on the top floor so it can see out onto the battle field. The platoon command deploys on the ground floor to hopefully delay anyone coming to claim the objective. On the road I place the chimera, full of veterans, ready to push forwards as he doesn’t have much anti-tank. Behind that I deploy the heavy weapons team to get a nice line of sight to his objective. To their right I place both the other infantry squad and company command.

To counter this, the blood angels combat squad the tactical squad, with the frag missile half on the level below the objective and the plasma gun half on the top. The Chaplin joins the missile launcher half. The rhino deploys far on the right out of the way. The speeder deploys on the left out of sight and the assault marines hold the bottom of the ruin with the objective. 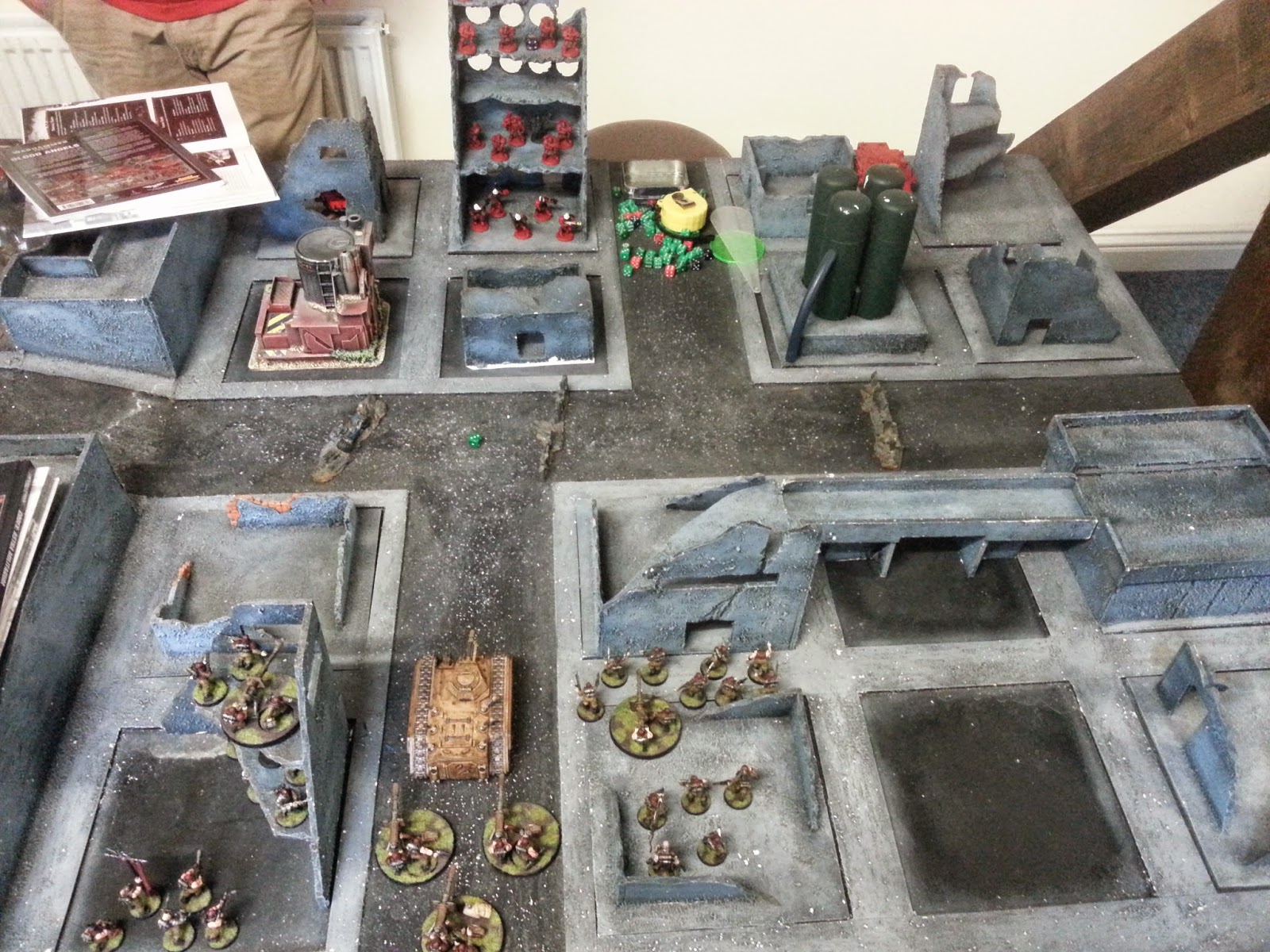 Firing the few shots in range, the heavy weapon team targets the tactical half holding the objective and a single marine dies. Autocannon fire and shots from the chimera fail to get though the power armour.

Pushing forwards, the rhino goes full speed making it though the ruins with ease. Taking advantage of its anti-gravity engines, the land speeder moves between the ruins until it gets into a position to target the chimera, and the assault marines walk forwards, getting out of difficult terrain ready to jump forwards next turn, eager to get to grips with the rebel guard.

Carrying on its course the rhino smashes forwards some more. Multi-melta fire from the speeder targets the chimera but it rolls very low and the front armour of the tank holds. A Krack missile misses the chimera landing in the rubble next to it. 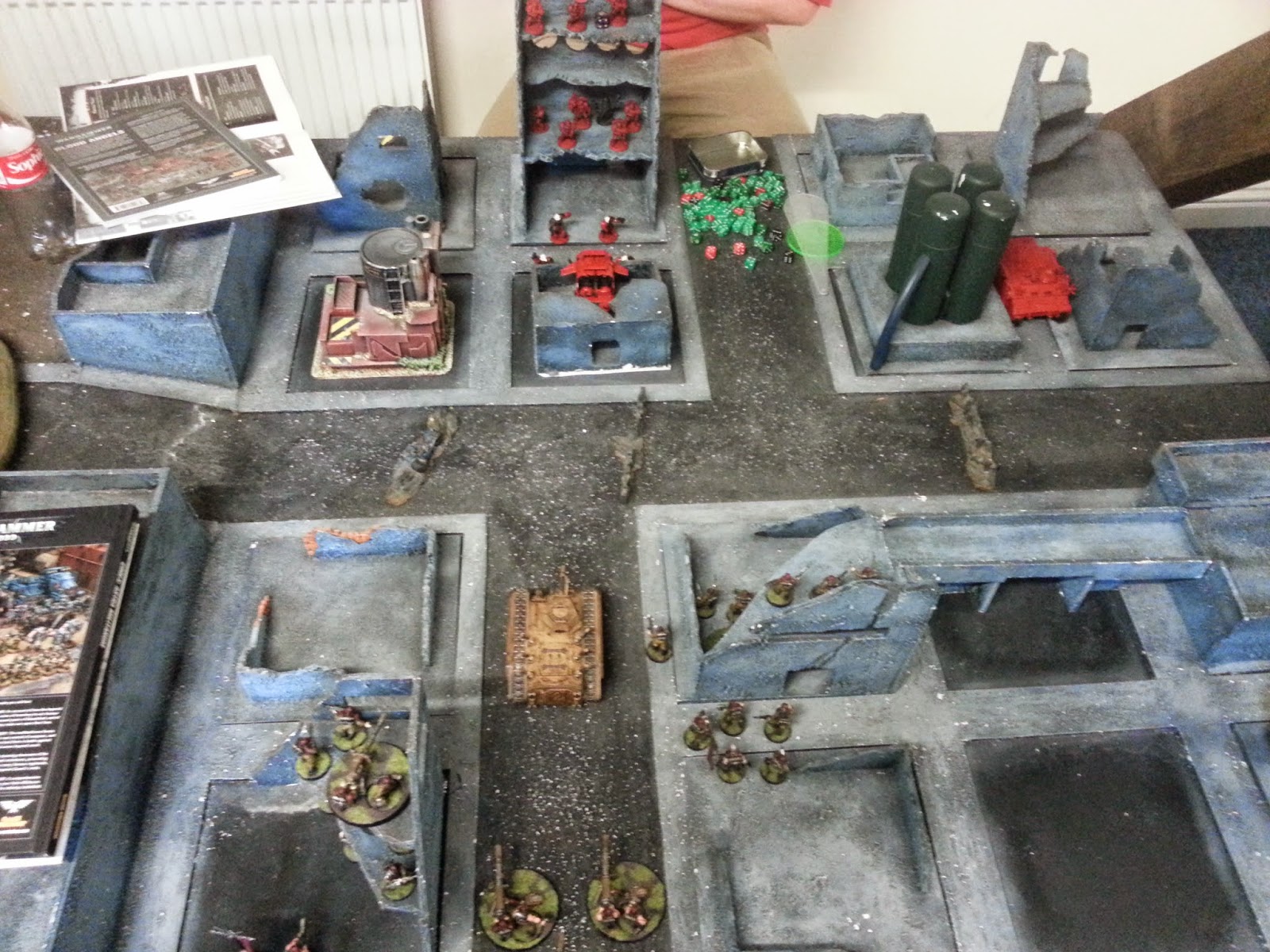 Again my force pushes forwards with the chimera taking point; it can see the land speeder so hopefully will be able to take it out before it does any damage. The infantry on the right move forwards defending the ruin, ready for the assault marines.

Firing all it has, including 2 meta guns out its hatch) the chimera targets the land speeder but all of the shots fail to do anything thanks to the 4+ cover save from the ruin. The lascannons again target the marines on the objective but they go to ground for a 2+ cover save and nothing happens. Autocannon fire does nothing as well. 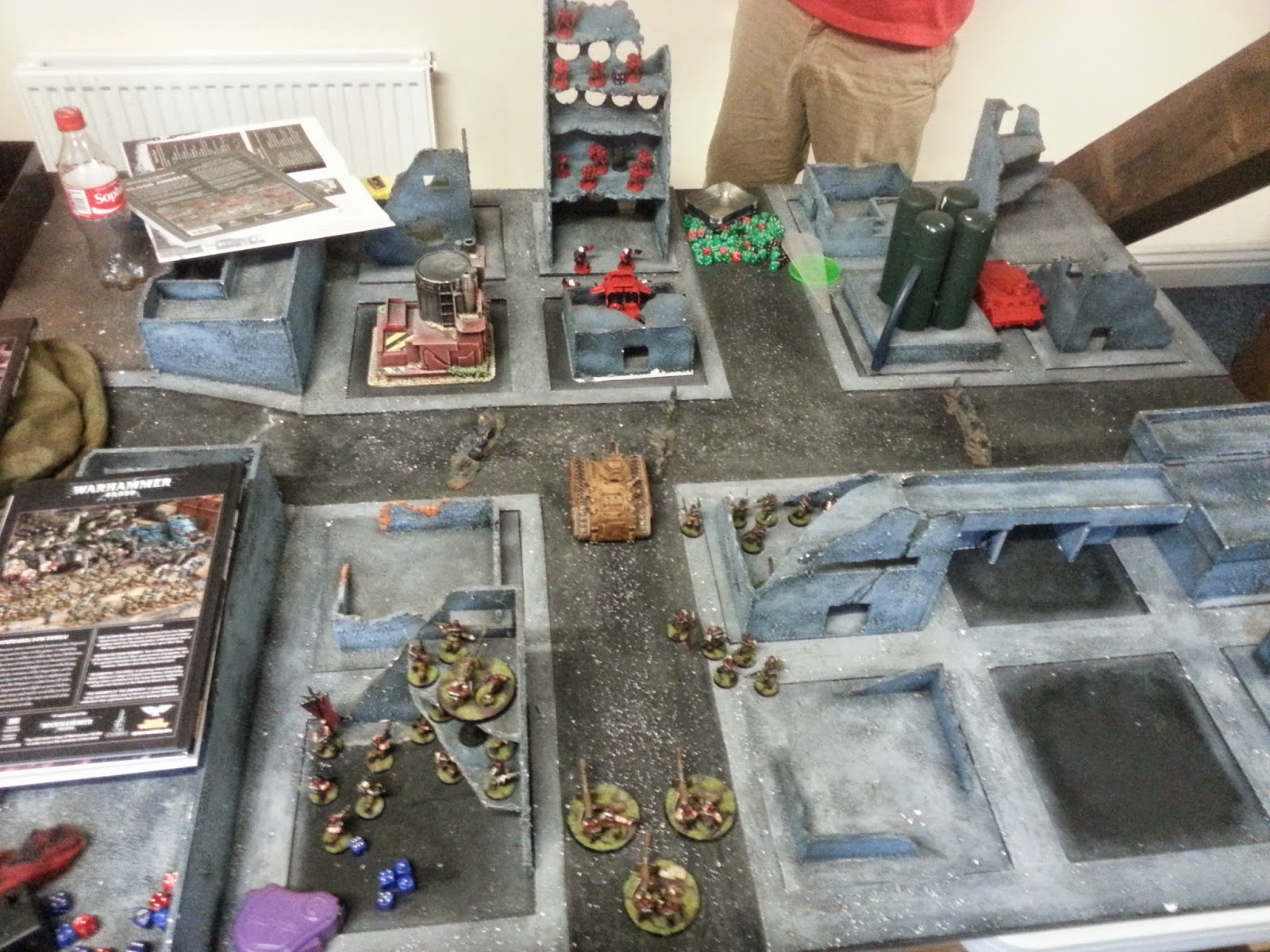 Jumping to the skies, the assault marines get close enough to assault the infantry squad at the front, while the land speeder moves to support them. Still the rhino pushes forwards.

Hitting this time, the krack missile manages a glance on the chimera, a snap shot from the tactical marines plasma gun hits the chimera and glances it as well, leaving it on a single hull point. He really wanted to burn my guard with this heavy flamer but instead shoots everything the speeder has at the side armour of the chimera and it wrecks it, forcing the veterans out onto the floor. Using their pistols the assault marines kill a single infantry man.

First assault of the game and the assault marines declare a charge on the infantry squad, they over watch and kill the closest marines. He rolls for his distance and gets snake eyes, failing the charge. That was lucky. 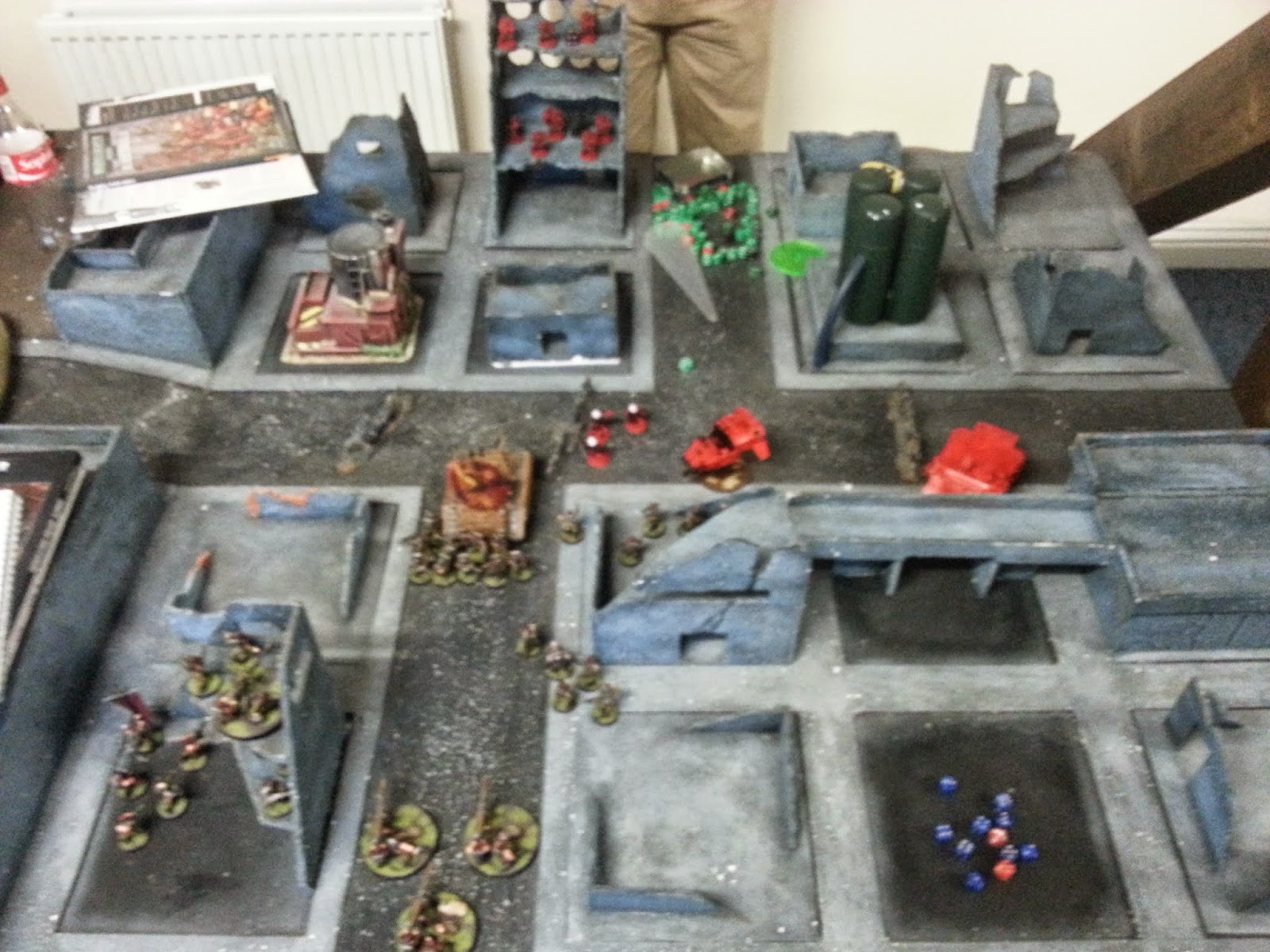 As the assault marines will hopefully be dealt with this turn there was no need to keep back the platoon command to support the squad holding the objective, so they push forwards to aid the rest of the force. Both the veterans and the company command move to face the land speeder while het infantry hold their ground ready to take on the assault marines.

Ordering the infantry, the command squad gives them an extra shot, they shoot at the assault marines and the lasguns alone take down 2 of the assault marines leaving 1 alive. Then ordering the veterans to take down the land speeder, he gives them tank hunter and they only manage to immobilise it after it jinks, leaving it on 1 hull point. The rest of the shots do nothing as they can’t get past the marines cover save or power armour. With a single assault marine left the command squad fires into him but the marine is too hardy for such an attacks. 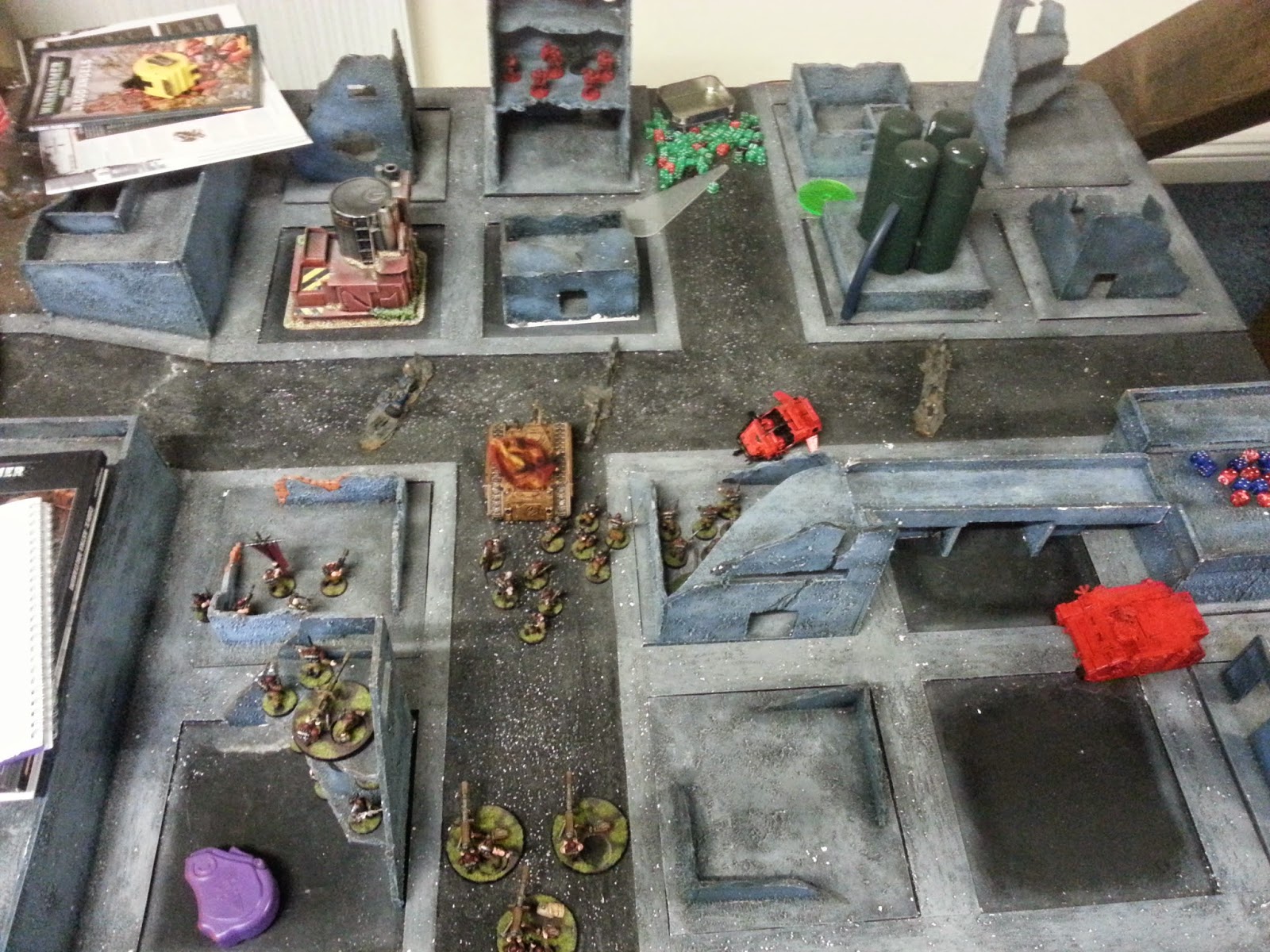 Only the rhino moves forwards, obviously intent on securing line breaker, the rest of the force holds the line. The lone assault marine jumps over the guard, and goes straight for the heavy weapons team.

As the veterans are stupidly clustered together a single frag missile is all it takes to kill off 5 of them. The bolters from the squad fire in as well but fail to do anything. A single pistol from the assault marine takes a wound off the closest heavy weapon.

Trying to do something of worth, the assault marine attempts to charge the heavy weapon team but get a lascannon to the face during over watch, killing him.

Moving up again, my force is almost upon the space marines, the veterans and infantry squad attack on the right, the command squad goes down the middle and the platoon command attacks the left.

The command squad order the veterans to fire at the land speeder and run, wrecking the skimmer before moving up. The infantry run as well, hopefully next turn to get a lot of shots in. The heavy weapon team can just about see the rhino and try and take it down but all the shots miss. 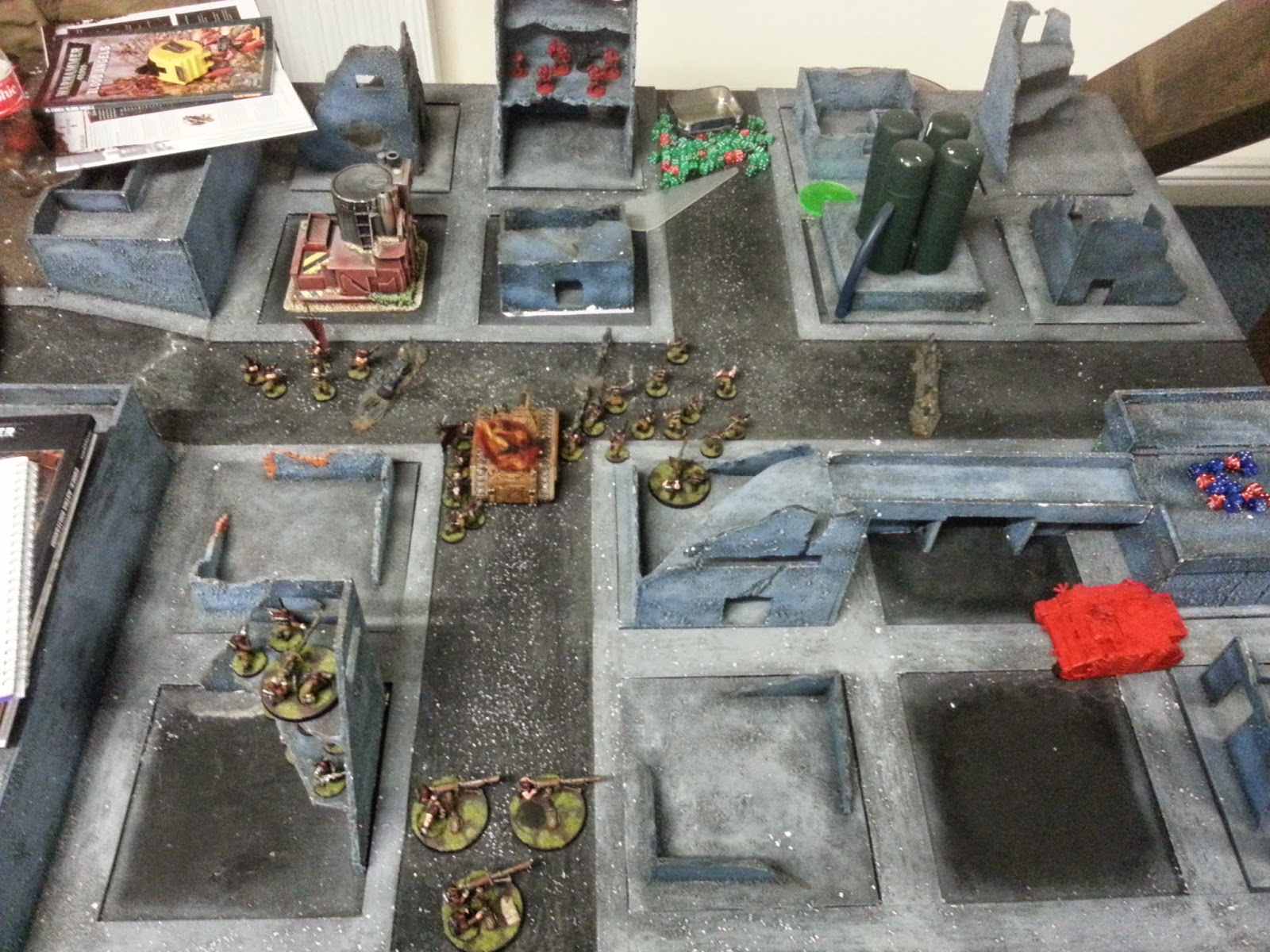 Not expecting to get shot at, the rhino goes deeper into the ruins but still can’t get out of line of sight. Seeing the danger, the Chaplin leaves his small tactical squad and climbs down the ruins.

Not wanting to stick around, the Chapin runs 6 inches into cover backwards. Bolter fire targets the veterans and only a single vet dies, but the other half of the squad targets the guardsmen with frag missile and bolter, killing enough to reduce them down to just a wounded autocannon. 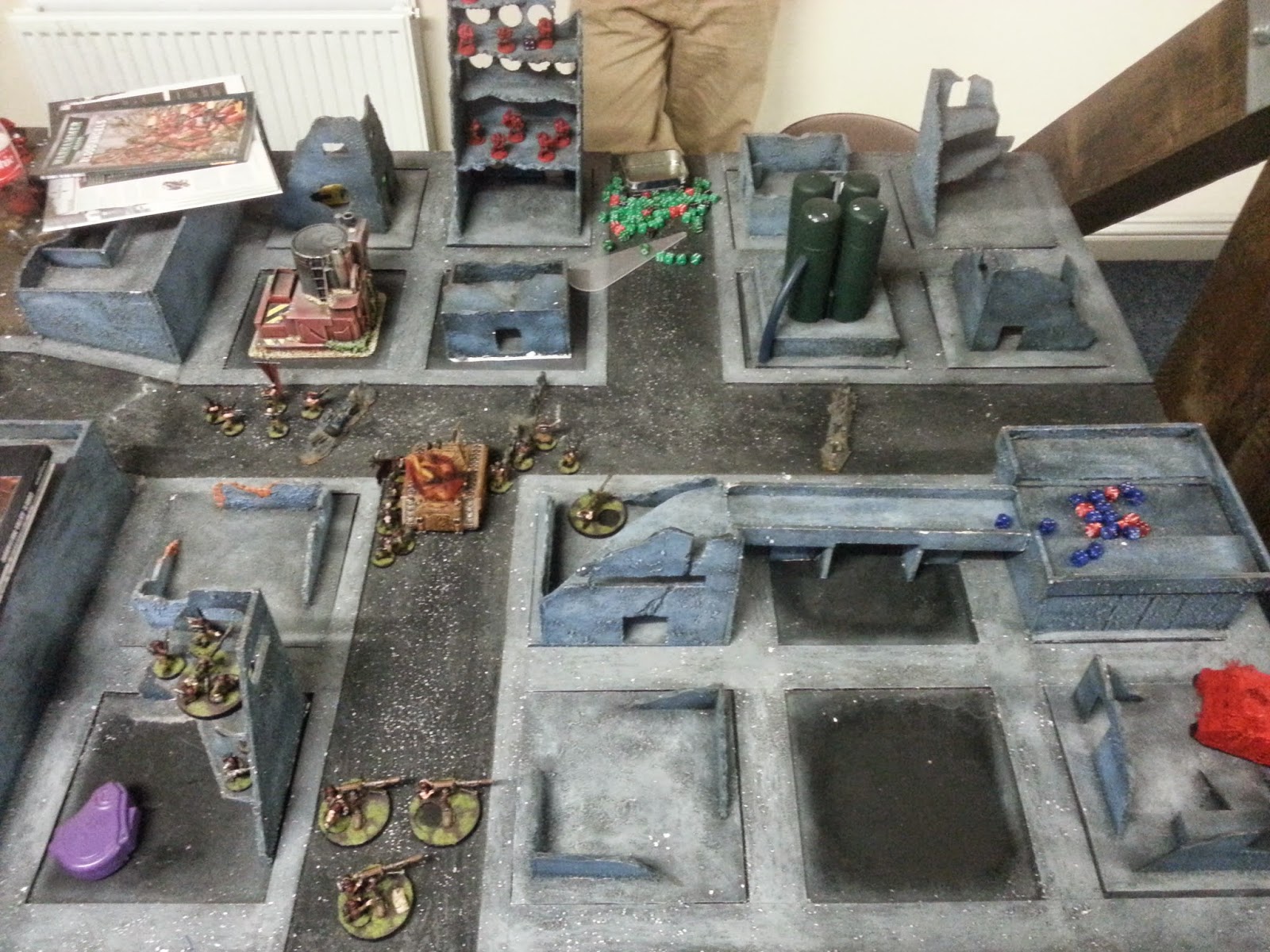 With little option the command squads get ready to storm down the alleyway together while the veterans take cover.

I fire everything that i can at the tactical marines on the objective, but they go to ground for a 2+ cover save, i still somehow manage to drag down 2 of them with what few shots i have left, but still 1 remains on the objective.

Coming out of cover, the Chaplin moves straight for the company command.

Covering fire from the tactical reduces the company command down by 3 guys.

Charging in, the Chaplin cuts down the remnants of the command without breaking a sweat, gaining slay the warlord.

We roll to see if the games carries on...

I move the veterans towards the Chaplin as well as the platoon command.

Lascannon and autocannon fire targets the marines on the objective but again they go to ground and are safe. The veterans fire the 2 melta guns they have left at the Chaplin, but 1 misses and 1 wounds. He takes his invulnerable save and passes unfortunately. The lasgun fire from the 2 squads does manage to take a single wound of the Chaplin though.

Tactical fire power brings down the platoon command while the Chaplin charges into the veterans and kills them all with ease. 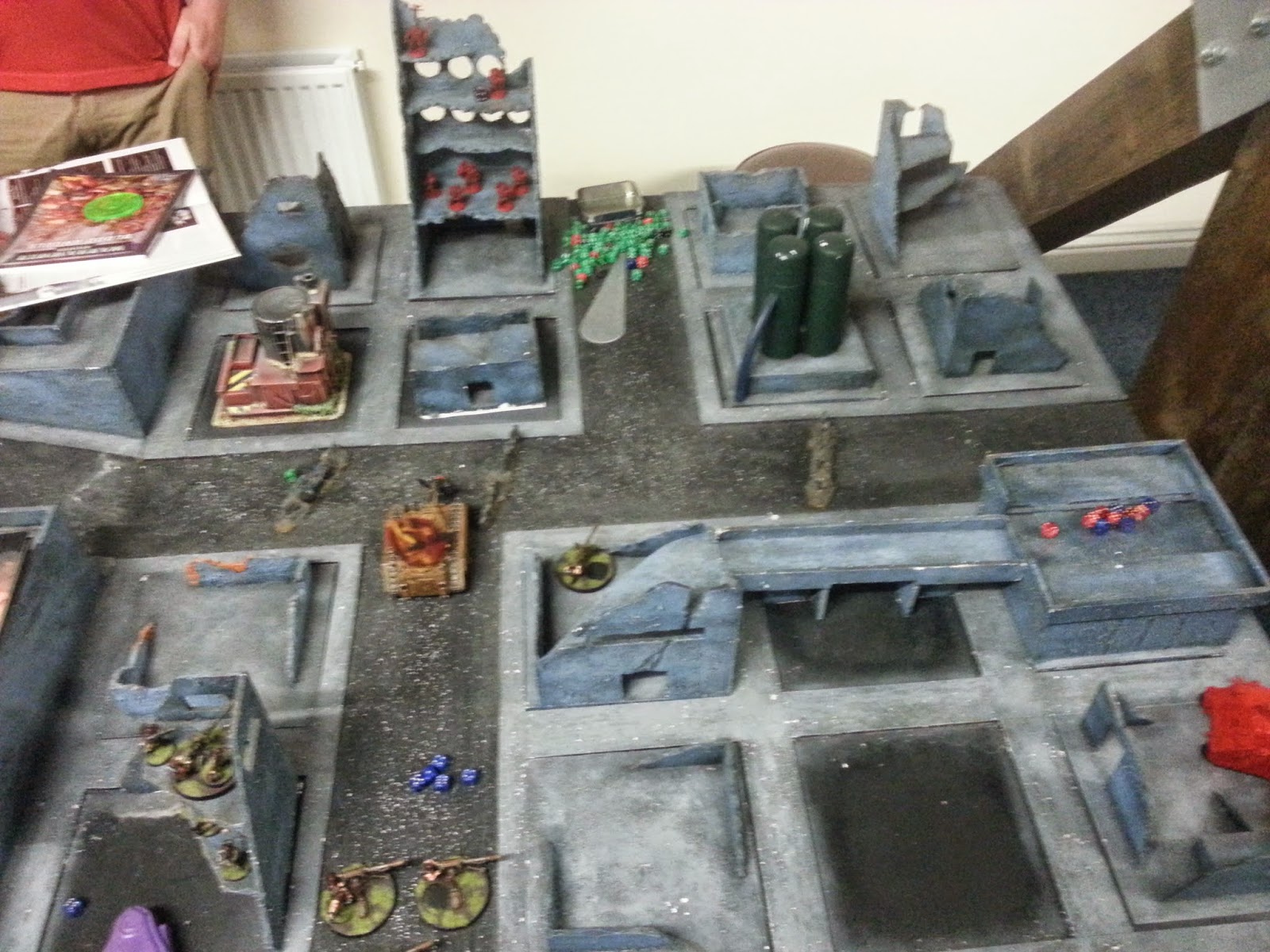 That went a lot worse than i expected. I knew guardsmen were weak but wow, i defiantly learnt a few things from this game, or rather, it cemented what i was thinking in my last game vs the knight.
·         Keep the infantry squads together, be it combining them or just having them close by they will always suffer if just one of them goes to do something unsupported.
·         Orders help: the few orders i issued did help quite a bit, but i think remembering the order which lets a model split fire might be of more use to me in the future, just to get the autocannons to target separate models
·         Warlord traits: The command warlord trait which allows units within 12 to use the warlord leadership was great, as it allowed me to pass orders on my own LD of 9 instead of 7 or 8, which was a massive difference. So i will probably keep using the command traits for now and see how they treat me.

So the factors that contributed to my loss where defiantly the infantry squads not supporting each other, if he had an extra 10 guys pushing up against him maybe i could have just pushed him off the objective, i’m not sure. His warlord trait was perfect for this game and that hampered me a lot, stealth in ruins? Bloody hell that was good. While i doubt it won it for him, it helped.

Anyway that’s it for the 600 point games for now, soon we will be upping it to something a little more. Hope you guys enjoyed.
Posted by Malduran
Labels: Battle report - 40K, Chaos Renegades