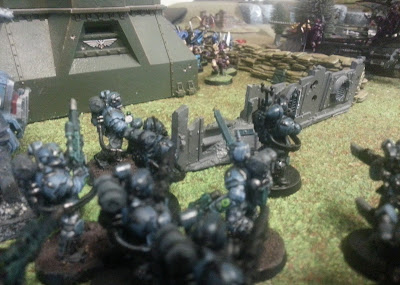 Last weekend I had a little but of free time so we had a quick game of 40k as it has been quite a while since I last played. As we only had a few hours we decided to play a small, 750 point game with a custom mission based on outpost we played in the Planetstrike game from a while ago. Its Dark eldar vs Militarum Tempestus both trying to capture a Imperial Bastion.

For this game we came up with a custom mission, to focus the fighting. We have a single objective in the centre of the table (an Imperial Bastion) which we need to hold to win. At the end of each game turn if some one is holding the objective they gain 1 point, at the end of the game if you hold the objective you gain 3 points. We are still using first blood, slay the warlord and line breaker. Nice and simple mission. Deployment is dawn of war.

We roll for deployment zones and the Scions win and select which half to deploy in. I then win the roll to deploy first and choose for my opponent to deploy first. Both of his Tauroxs deploy on the left with the scion command and volly gun squad deployed inside. The melta squad starts inside the valkyrie which starts off the table.

My deployment has both of the raiders on the right out of sight of his vehicles, the Succubus joins the raider closer to the middle of the table. In the woods in the middle the warriors deploy, and the bikes start on their right flank. On the far left the beastmaster and his pack deploy in cover. I keep the scourges in reserve, ready to deep strike in later.

Not wanting to move straight into the dark eldar lines, both Tauroxs move forwards the bastion, but the one with gatling cannon hides in the trees.

Both of the Tauroxs shoot at the beastmaster unit and kill them all in the turn. First blood to the tempestus 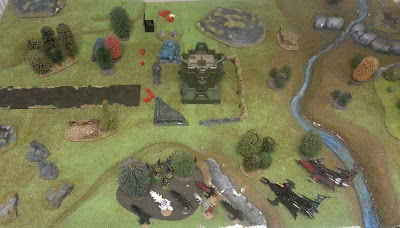 The fast elements move forwards, the bikes move towards the bastion and the raiders follow suit. Holding their ground, the warriors aim their dark lance.

Dark lance fire targets the gatling taurox but the shot just misses. On the right the raiders can see the other taurox but fail to do any damage. The bikes boost and grab the objective.

End of game turn: 1 point to the dark eldar for holding the objective 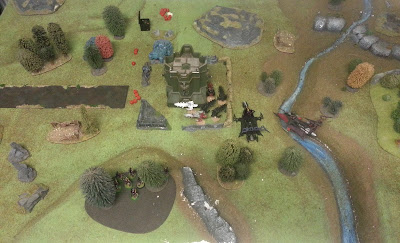 In from reserve comes the Valkyrie, straight to the raiders and the scions jump out the back. The scions scatter off course a little and 1 of the troopers die. The command taurox moves back behind the bastion and drops out the command squad while the other moves to outflank the bikers. 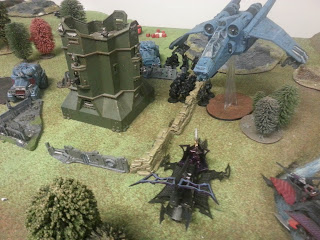 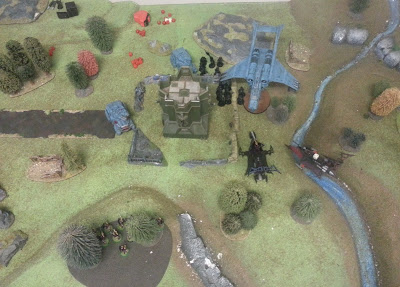 Rolling for reserves, the scourges fail to make an appearance. Both of the raiders move straight towards the scions and jump out. The succubus unit goes for the scions while the other goes after the command squad.

Again lance fire from the warriors targets the taurox with gatling cannon and glances it. Both raiders try to shoot the other but as they can only snap fire they miss. 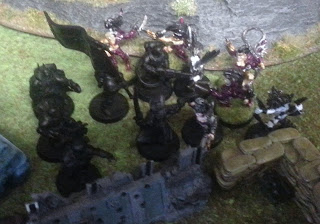 Assault and the Succubus and bodyguard charge straight into the scions. The succubus takes out 4 scions on her own while the rest of the unit kills 4 more. Swinging his power fist the wyches jump out the way evading his attacks. The other wych unit charges into the command thanks to the fleet re-roll after the front wych got her head blow off from overwatch. Stepping up the commissar issues a challenge to which the hekatrix accepts, she deals 1 wound to him then gets her head cut off. The other wyches kill a scion and avoid any more damage for a drawn combat. The lone scion runs from the combat but gets cut down, allowing the wyches and succubus to consolidate to the bastion. 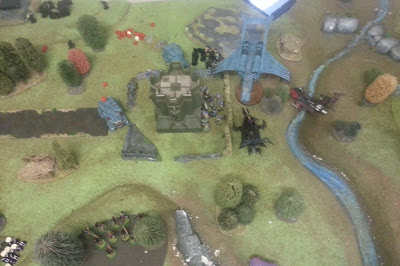 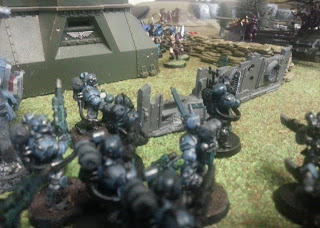 Not sure what to do, the valkyrie flies off the table. The taurox moves down and unloads its scions as they try to avenge their fallen brethren. The other taurox backs away to get a better line of sight.

Scions shoot at the wyches, and put holes in 4 of them and even wound the succubus. Both tauroxs shoot at different raiders, both jink, and take no damage.

In the combat the wyches fail to do any damage and lose 1 of their number, but thankfully they are fearless thanks to my warlord trait. 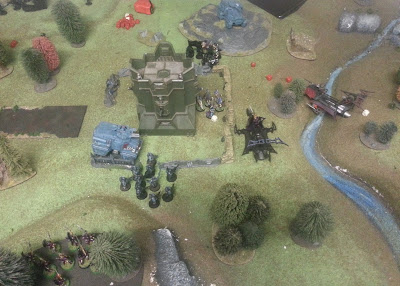 The scourges were obviously just waiting for the prey to appear and arrive from reserve. They deep strike next to the scions and lock on ready to kill. The succubus leave her wych unit and goes to help the other unit while the wyches move towards the scions.

The hail of fire from the scourges shreds the scions killing half of the unit (my opponent got unlucky and failed 5 out of 7 saves). Adding their fire power, the warriors shoot at them as well, 4 die to splinter fire then the last gets sniped by the dark lance (again, my opponent just got unlucky). Alone the wyches are a bit surprised so throw a haywire grenade at the taurox but its a dud, when I roll a 1 to pen. 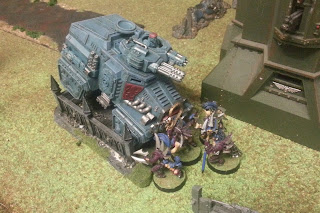 Assault and the wyches charge into the taurox and fail to do any damage with their plasma or haywire grenades. The succubus charges in and issues a challenge, to which the commissar accepts. Swinging first, the succubus deals 2 wounds but they both get stopped by the commissars refractor field, taken by surprise she takes a wound. The wyches manage to deal 3 wounds, killing the standard bearer, vox officer and dealing a wound to the commander, they hold though.

End of turn: The bastion is contested 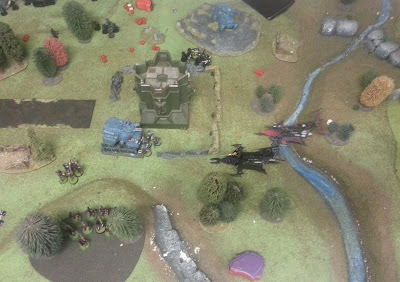 Returning to the battlefield, the valkyrie attacks the raiders on the right. Both of the Tauroxs move back away from the dark eldar. 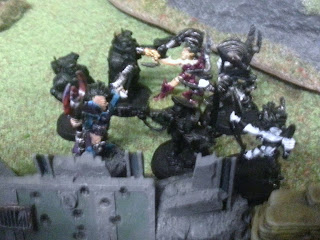 Seeing the valkyrie behind it, the raider jinks as it fires its lascannon at it, dodging a penetrating hit. A single shot from the taurox battle cannon targets the scourges as they are all in a tight circle, and the shot hits. They go to ground but they all die regardless. Continuing this murderous streak the other taurox targets the wyches and kills all of them.

In combat the Succubus fails to do any damage to the commissar in the challenge, but manages to dodge the humans attacks. The wyches manage to wound the commander but one gets grabbed by his powerfist and gets pulverised. 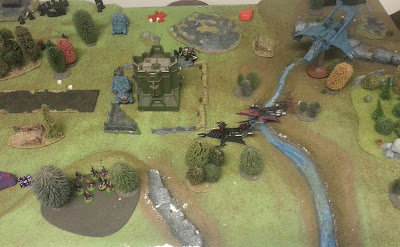 Both raiders split off, one to the gatling taurox while the other faces the Valkyrie.

Dark lance from the raider on the left targets the taurox and explodes it! Copying this, the warriors target the other but only manage to blow the storm bolter off it. To finish the shooting phase the other raider targets the valkyrie but misses.

Combat, and FINALLY the succubus, one of the finest warriors of the wych cults kills the commissar... should have taken 1 maybe 2 turns not this. The wyches wound the commander and dodge his attacks back. End of combat and the commander bottles it and runs, but gets cut down for slay the warlord. 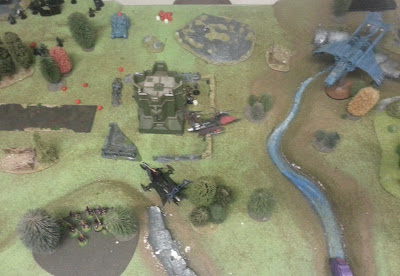 With little left, the taurox moves to see the succubus, hoping for slay the warlord, and the flyer goes into hover mode and carries on attacking the raider.

Taurox battle cannon targets the succubus but the shot misses, the autocannons shoot and both hit, but thankfully she makes her two cover saves.

Pissed at the taurox, the succubus runs at the vehicle while the wyches hold the bastion and the raiders face the Valkyrie. The warriors move up to secure the objective as well.

Running the warriors reach the bastion. The raiders both shoot at the Valkyrie, which jinks, and takes a single shaken hit. A haywire grenade from the succubus hits the taurox, and glances it leaving it on 1 hull point.

Charges and the succubus makes it into combat with the taurox but fails to do anything to it.

End of the turn and the dark eldar hold the bastion.

We roll and the game ends. As the dark eldar hold the bastion +3 points

Victory to the Dark Eldar.

That was a fun little game but the mission defiantly favoured me with my speed and desire to be in close combat. Facing the scions was also a benefit, as they are paying a lot of points for ap 3, which really doesn't bother me as I only had a 6+ save, any gun will ignore my armour.

The wyches were fun to use in this game, and having the wych cult raiding was a nice bit of fluff. However all the models were totally different colour schemes as my dark eldar have come from many different peoples collections which I have amassed over the years. I wish they were all the same colour like a unified army, but that will probably never happen.

Still its good to get back into 40k, and will hopefully get more reports in the future for you, but at the moment I'm painting more orcs so you will have to bear with me over the next few posts with my orc painting.