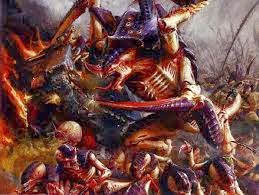 I thought I would ignore the nay Sayers of the internet who say Tyranids suck, and have a go at creating my own tyranid list. And I’m happy with what I have made so far, I do want to try it out in the future, so I might borrow some tyranids from a friend of mine soon. The biggest thing that struck me about the new codex was that carnifex’s are cheap, very cheap, guess where this is going...

This list is for my normal points limit of 1500, it’s a first go with the new tyranids so it might not be as good as I hope, but we will see if I ever get to test it out.

I know a few of you will be thinking, what the hell is this, a few of the choices are unorthodox, especially with the dual Primes. With their points going up I know people don’t like them at the moment but being able to hide them in a unit of 20 Termagants is priceless, and it makes it so much more survivable than having a tyrant going around on his own.

The raveners are in the swarm to force my opponents to make decisions, having 10 of them coming at you able to charge turn 2 is a horrible thing to face. Hopefully I will be able to get them out of synapse range turn 1 and in a peice of terrain, so when the shots fly at them, they can go to ground and survive. What’s even batter about going to ground is that the new instinctive behaviour rule says ‘all tyranids units outside of synapse range must take a leadership test unless they are: engaged in combat, falling back, HAVE GONE TO GROUND, or arrives from reserve this turn’ so they won’t have to take instinctive behaviour. Then turn 2 the primes walk forwards, get them into synapse range, become fearless and ignore going to ground, so they can move and charge that turn.

Genestealers, they are just there to outflank and grab an objective late game or attempt to go after a tiny unit which can’t shoot much. Yer they will die but we shall see.

Finally the Carnifex’s they should be able to take some punishment backed up by the venomthropes and having heavy venom cannons, they can put out a strength 9 blast, hopefully knocking out transports for the raveners to take out the troops inside. They will constantly be moving up the field then they can hopefully charge turn 3 or 4 and mop up everything that is left on the table.

That's the army, what do you guys think? Hopefully I will be able to test it out soon.
Posted by Malduran
Labels: Army List